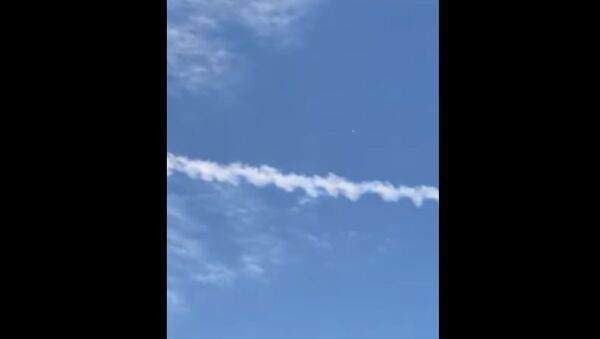 Asya Geydarova
Editor
All materialsWrite to the author
It appears that the footage "contained" two conspiracy theories at the same time - one about the possible existence of aliens, and the other pertaining to so-called "chemtrails".

Footage of an alleged flying saucer hovering in the sky above Cathedral City has been recently shared on social media, triggering bewilderment among netizens.

The video was posted by a YouTuber specialising in paranormal cases, who claimed that the vapour trails the mysterious object was following were actually deliberately sprayed "chemtrails" to harm humans.

"This video might surprise you but it doesn't surprise me because whenever these chemtrails are around, or as I like to say, our daily dose of vitamins are being sprayed upon us, we always see these white orbs", the Youtuber told his subscribers in the video. "They seem to be hovering around these objects or moving along it like this one."

In another line, he said that some believe aliens are trying to "protect" humans.

The Youtuber actually gained a lot of support in the comments, as netizens rushed to share their reflections on the matter.

One user agreed with the Youtuber, commenting, "I also believe those 'orbs' are actually devices used to 'observe' from their craft or base that is 'elsewhere'... but that's just my opinion." He was likely referring to the conspiracy theory that aliens want to "clear" the Earth of humans.

He was supported by another netizen, who claimed that these white "orbs" are alien "surveillance technology" to collect data.

The users also referred to the so-called "chemtrails" conspiracy theory. Its advocates claim that toxic chemicals are being sprayed from passenger planes for certain reasons, from human population control and psychological manipulation to alleged tests of biological weapons. There is, however, no scientific evidence to prove it.