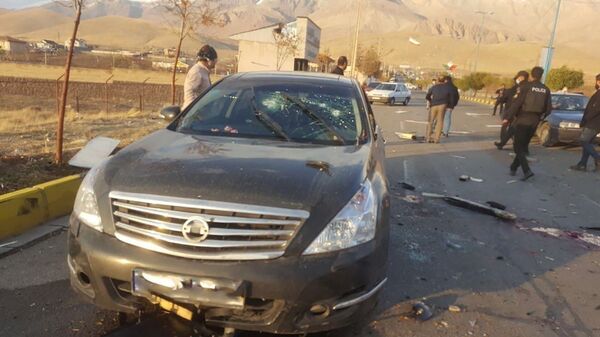 Ilya Tsukanov
All materialsWrite to the author
Mohsen Fakhrizadeh, a senior Iranian physicist and rocket scientist, was killed in a brazen daylight ambush on his convoy on 27 November, while he was traveling along a rural road about 175 km east of Tehran. Iran immediately blamed Israel for the attack – while Tel Aviv has not yet commented on the matter.

Israel's assassination of Iranian nuclear scientist Mohsen Fakhrizadeh was meant to destabilise the region and provoke war in the final days of Trump’s “ill-fated” presidency, Iran’s President Hassan Rouhani said during a press conference in Tehran.

Emphasizing that "the region's stability" was of great importance to Iran, Rouhani warned that Tehran nonetheless reserves the right to retaliate for the assassination, and would do so at the time and place of its choosing.

Rouhani also made his position clear on the possibility of the US rejoining the Joint Comprehensive Plan of Action (JCPOA) nuclear deal, which was scrapped by President Trump. Iran’s leader said the agreement was not "open to renegotiation" and that President-elect Biden was "well aware of" the fact. Rouhani added that the only option left for Washington is to rejoin without demanding any changes linked to missiles or regional policy.

Asked about whether Iran is considering making financial compensation a condition for the JCPOA, Rouhani said that while there was a great deal for the US 'to pay for', starting with the 1953 CIA coup d'etat, setting compensation as a precondition would only ensure that sanctions remain in place for several more years. First, he said, the parties to the JCPOA must return to the agreement and lift anti-Iranian sanctions.

Rouhani gave his two cents on Iran’s plans for oil exports for the coming year as well, saying he'd ordered the oil ministry to get ready to produce 2.8 million barrels  day (bpd), with 2.3 million of that figure set for export. In 2015, Iran's crude exports reached 2.15 million bpd in the aftermath of the JCPOA deal before dropping to 600,000-700,000 bpd in 2020 amid the threat of secondary US sanctions and threats to completely stall Iran’s crude exports.

Democratic presidential candidate Joe Biden is on the verge of being officially named US president-elect, with the Electoral College expected to meet on Monday for a formal vote. Trump and his supporters continue to contest the election results, with the Supreme Court recently throwing out a case brought by the state of Texas over alleged vote fraud by Trump's opponents in multiple battleground states.

Iran has expressed cautious optimism about the prospects of a Biden presidency and Washington’s potential return to the JCPOA, but also repeatedly stated that the agreement was not open to renegotiation.

Trump to Reportedly Pull Dozens of US Diplomats Out of Iraq as Tensions Grow Between US, Iran
Tehran's relationship with Washington hit its lowest point since the 1979 Iranian Revolution under Trump’s presidency, with the US administration pulling out of the nuclear deal in 2018, sending fighter jets to the Persian Gulf in May 2019, deploying a spy drone in the Strait of Hormuz in June 2019 (which Iran subsequently shot down), and assassinating Qasem Soleimani, one of Iran's most respected generals in a drone strike in Baghdad in January 2020. Iran retaliated to the latter by firing missiles at two US bases in Iraq, severely injuring more than 100 US troops. Hostilities were ratcheted up again in April 2020, when the US Navy threatened to blow Iranian gunboats out of the water in the Persian Gulf after reporting that the small vessels had "harassed" their warships.

The assinsation of Iranian nuclear scientist Mohsen Fakhrizadeh on 27 November escalated tensions between Tehran and the US-Israeli alliance further. Senior Iranian officials including Rouhani and Foreign Minister Mohammad Javad Zarif immediately accused Tel Aviv for the attack, while Israel’s top brass has so far remained silent on the matter. However, Israeli officials have expressed fears that Iran may retaliate, warning of possible attacks on Israeli diplomatic missions, ballistic missile strikes, or the use of “proxies” in Syria, Lebanon, and Gaza. Two days after Fakhrizadeh was killed, an anonymous Israeli official told the New York Times that Israel should be "thanked" by the world for eliminating the scientist, claiming he was the head of Iran's alleged nuclear weapons programme.