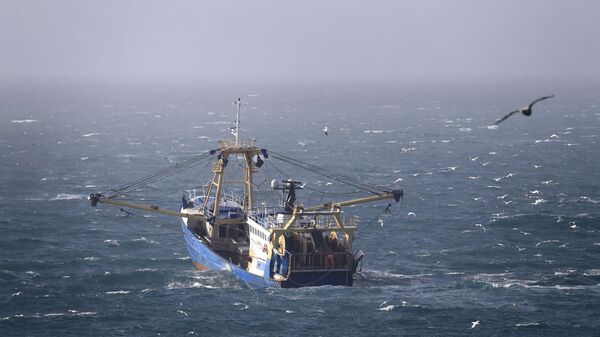 James Baillie
All materialsWrite to the author
The warning comes as the UK government refuses to bow to "outlandish" demands by France for EU vessels to be allowed the right to large fish quotas from British waters after the UK leaves on January 1. Fishing rights in UK waters are one of the last remaining sticking points in free trade talks that are said to be on the brink of collapse.

French fishermen who regularly fish in the English Channel have warned they will set up blockades to stop British vessels from 'supplying the French market' in the event of a No Deal Brexit.

They said they would respond to having 'zero access' to UK waters by blocking ships carrying vital goods from entering major ports such as Calais.

'If we are deprived of our fishing grounds, we will not watch the British supply the French market,' Dimitri Rogoff, president of the Normandy regional fisheries committee (CPRM), told radio station France Info.

Responding to the move, Rogoff said: "Sending warships would mean that we are negotiating things relating to war. It is inappropriate at the time of negotiations to flex your muscles like that."

Rogoff is worried that French fishermen will be robbed of their ability to fish in Channel waters by their European neighbours in they cannot access British waters.

He argued that large trawlers, mostly Dutch-owned, are taking large quantities of fish from the Channel - in both French and English waters.

"Our coastal fleets are robbed of part of their quota by these huge boats, "Rogoff told 76 Actu.

British Foreign Secretary Dominic Raab said yesterday that if the UK does leave the EU on WTO terms it would enforce access to UK territorial waters as regards to fisheries and "everything else."

'For the French and others, that will mean - you know, forget those outlandish terms that they were asking of us - their fishing industries would have zero access guaranteed.'

Earlier today, the EU chief negotiator, Michel Barnier, said that a free trade deal between the UK and the EU was still possible but that the issue of fishing rights remains a sticking point.