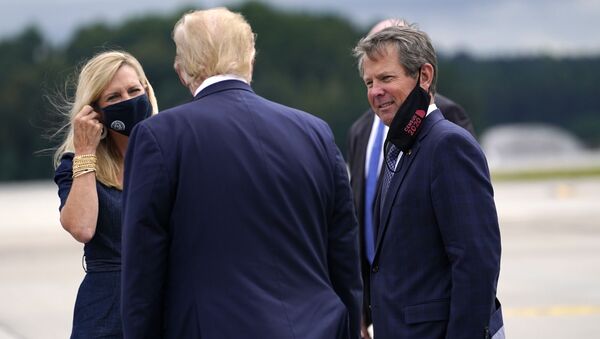 © AP Photo / Evan Vucci
Subscribe
Ilya Tsukanov
All materialsWrite to the author
Last week, Republican Georgia Governor Brian Kemp told lawmakers in his state’s legislature definitively that they would not be holding a special session to pick electors for the upcoming Electoral College vote. Donald Trump and his allies have been lobbying state officials to get behind the White House in its allegations of widespread voter fraud.

President Donald Trump took to Twitter late Sunday night to attack Georgia Governor Brian Kemp, calling him a “fool” who along with Georgia Secretary of State Brad Raffensperger, had been “played” by the Democrats.

“What a fool Governor @BrianKempGA of Georgia is. Could have been so easy, but now we have to do it the hard way. Demand this clown call a Special Session and open up signature verification, NOW,” Trump wrote.

“Otherwise,” the president warned, the state’s Republican senators could have a “bad day” on 5 January, when Georgia voters will go to the polls for a runoff election.

Trump went on to attack the consent decree settlement, calling it “terrible for Republicans (and honest people!)” and suggesting it “must be opened up NOW.” Trump has repeatedly attacked the settlement, which he claims prevents election officials from being able to verify signatures on absentee ballot envelopes. The consent decree settlement was introduced in March following a lawsuit by the Democratic Party which argued that minority communities were disproportionately affected by the rejection of spoiled ballots, allowing election officials to notify voters about problems with signatures to allow for corrections.

Trump and his surrogates have repeatedly called on Kemp to call a special session of Georgia’s legislature, or to audit ballots to verify and match the signatures of mail-in ballots – the central pillar of the president’s claims about widespread voter fraud in battleground states.

Kemp has rejected calls for a special session, prompting Republican South Carolina Senator Lindsey Graham to warn the governor that there was a “civil war” brewing within the GOP over state officials’ failure to stand behind the President in his fraud fight.

Last week, after two recounts and a special audit of the state’s five million ballots, the state formally handed its 16 electoral votes to Biden, with the final count showing the Democratic candidate triumphing over Trump by less than 12,000 votes.

On Wednesday, Kemp reiterated that Georgia lawmakers would not be gathering for a special session to pick electors for the formal 14 December Electoral College vote, saying such a scenario was “not an option” for his state.

'We Caught Them': Trump Says Efforts to Challenge the Presidential Election Results 'Not Over'
Georgia has been at the centre of the Trump campaign’s fraud claims. On 4 December, the Trump legal team presented what they suggested was video evidence of election fraud in Georgia’s Fulton County, with footage appearing to show election staffers counting ballots pulled from under a table after observers and members of the press were told that counting was over for the night. Secretary Raffensperger dismissed the footage as “unfounded” following an internal investigation.

Electoral College electors from all fifty US states will meet to cast their ballots on Monday, with the process widely expected to hand the election victory to Biden. In the wake of the 3 November vote, the Trump team has filed dozens of court cases in multiple battleground states alleging voting irregularities ranging from vote dumps in the dead of night to observers being kicked out of count rooms. The vast majority of the cases have been rejected. Last week, the State of Texas filed a lawsuit with the Supreme Court accusing the states of Georgia, Michigan, Pennsylvania and Wisconsin of violating their own legislatures’ statues on election rules. On Friday, the top court of the land threw out the case, saying Texas had failed to demonstrate “a judicially cognizable interest” in how other states carry out their elections.

Trump has complained about mail-in ballots and their alleged propensity for fraud for months, alleging that they were easier to forge, steal or otherwise manipulate by unscrupulous individuals than registered absentee ballots or votes cast in person. The Democrats have dismissed Trump’s claims, and accused him of searching for an excuse to allow him to stay in power indefinitely in the event of a loss.