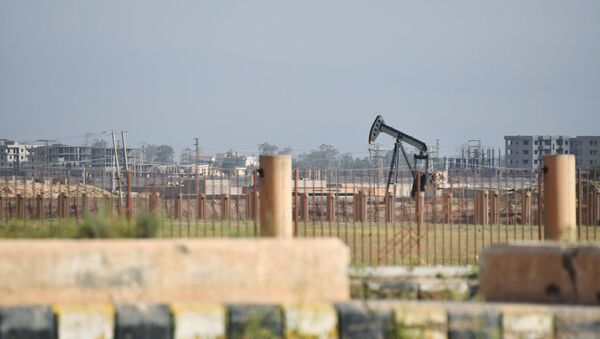 © Sputnik / Mikhail Voskresensky
/
Go to the photo bank
Subscribe
Ilya Tsukanov
All materialsWrite to the author
In late 2019, Donald Trump said repeatedly that Washington would be “keeping” the oil resources of northeastern Syria. Syrian President Bashar Assad sarcastically praised Trump over the remarks, suggesting the US president had revealed the real reason for the ongoing US occupation of part of his country.

A convoy of 85 tankers and military vehicles including at least 16 trucks belonging to US forces has left Syria’s oil-rich Hasakah province and made its way to Iraq via the al-Walid border crossing, the Syrian Arab News Agency (SANA) has reported, citing local sources.

According to sources from the village of al-Sweidyia, which is situated near al-Walid, some of the transport trucks were also carrying unspecified military equipment. The state news agency offered no further details on the convoy or its makeup.

The US and its Kurdish-majority Syrian Democratic Forces (SDF) militia allies regularly smuggle oil out of Syria using al-Walid, a border checkpoint that the Syrian government classifies as “illegal” because of Damascus’s lack of jurisdiction. The same checkpoint is used to shuttle US military equipment and supplies into the war-torn nation.

In October, a Sputnik Arabic correspondent reported that the US military had begun construction of a new military facility in province of Deir ez-Zor about 1-2 km from the Iraqi border along the Euphrates River. The base is expected to join three other illegal facilities the US is already operating in the province near the al-Omar oil field and the Konkio gas plant, plus the administrative border between Deir ez-Zor and Raqqa provinces.

IDF Admits Conducting Operations in Syria, Claims to Have Slowed Iran's Alleged 'Entrenchment' There
Last year, US President Donald Trump stated repeatedly that US troops would stay in Syria to “keep” the country’s oil, and prevent these resources from falling into the hands of either terrorists or the nation’s internationally recognised government. The same month, Russian military intelligence released a detailed presentation on the extent of US oil smuggling activities, uncovering an operation involving the Pentagon, the CIA, private contractors, Kurdish militias and US energy concerns netting upwards of $30 million-worth of oil every month.

Prior to the 2011 war, Syria depended on its (relatively modest) oil and gas wealth for about 20 percent of the state’s budget. These energy reserves are concentrated heavily in the country’s northeast, and held mostly by the US and its SDF allies. This state of affairs has left the normally energy-secure Syria partially dependent on imports from abroad.

In August, Bashar al-Jaafari, Syria’s ambassador to the UN, openly accused Trump of stealing Syria’s oil, thus “depriving the Syrian state and Syrian people of the basic revenues necessary to improve the humanitarian situation, provide for livelihood needs, and reconstruction”.

Syrian authorities have estimated that the country would require between $200 and $400 billion and ten years to rebuild from the devastating US-backed civil war which broke out in 2011 on the wave of the so-called ‘Arab Spring’ protests throughout the Middle East.