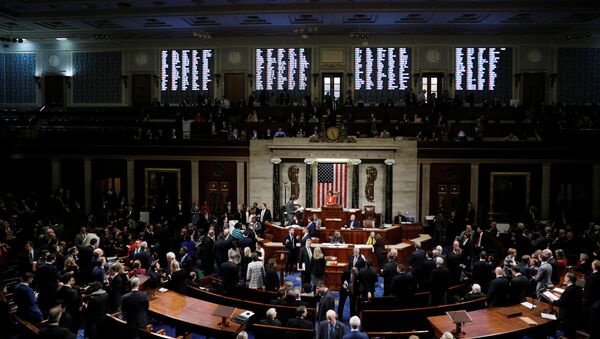 Ekaterina Blinova
All materialsWrite to the author
A story about an alleged Chinese spy rubbing shoulders with prominent US politicians was broken by Axios in early December – it was the result of a year-long investigation. Wall Street analyst Charles Ortel has shed light on the US mainstream media’s sudden interest in the Democrat’s longstanding ties with China.

California Democratic Representative Eric Swalwell found himself caught up in a spy scandal after an investigation by Axios journalists revealed he was being targeted by an alleged Chinese spy named Fang Fang, aka Christine Fang.

Fang was a student at California State University East Bay and is said to have developed extensive ties with US policy-makers, including one congressman, between 2011-15. She subsequently attracted the attention of the FBI, who placed her under surveillance. According to Axios, US authorities believe Fang's major aim was to gather political intelligence and "to influence rising US officials on China-related issues."

Swalwell, who won a seat on the House Permanent Select Committee on Intelligence in January 2015, reportedly had ties to Ms Fang but cut them short after she was tracked by the FBI.

The revelation caused a stir in US Congress, with Republican Rep. Jim Sensenbrenner (Wisc.) demanding the House Ethics Committee on 11 December  investigate the controversy surrounding Swalwell.

"It is unknown how much private and/or classified information Fang had access to as a result of her relationship with Rep. Swalwell," Sensenbrenner wrote in his request.

However, House Speaker Nancy Pelosi immediately defended the California Democratic representative, saying she has no concerns over him.

​​Swalwell was vocal in his support for the investigation into the alleged links between Donald Trump and Russia in the wake of the 2016 election, labelling an encounter between Trump Jr. and Russian lawyer Natalia Veselnitskaya in June that year “a meeting with a Russian spy." However, Veselnitskaya has never been accused of espionage by the US. Roughly three months after Swalwell's groundless claim, Special Counsel Robert Mueller officially confirmed that his probe had failed to find any evidence of "collusion" between Trump's associates and the Russians.

"Swalwell is an arrogant buffoon who, long ago, should have been pushed into obscurity", says Ortel. "His continuing, manifestly false claims regarding the Trump family being in thrall to Russia now stand in stark contrast to allegations that he literally may have long been in bed with an [alleged] Chinese spy".

Fang Fang had sexual relationships with at least two mayors of Midwestern cities, according to Axios. However, it’s not clear if Swalwell and Fang were engaged in intimate relations, according to the media.

Democrats and Their China Ties

Axios’ investigation indicated that Fang's social network in California largely consisted of Democratic politicians. "Democrats dominate the Bay Area, from mayors to its numerous US congressional districts, and anyone seeking proximity to power needs to be in their political circles,” the media outlet suggested.

In addition to the Swalwell story, the media – while citing the China deals – has started actively reporting on the FBI's probes into alleged so-called “pay-to-play” schemes by Hunter Biden, the son of Democratic president-elect Joe Biden.

Ortel says it’s no coincidence that Swalwell and Biden's stories started trending the same week, as it follows the continuous anti-China trend.

The US-China relationship started deteriorating in 2018 over Washington's crackdown against Huawei and other Chinese telecom firms, and reached a new low after the COVID outbreak. While some observers suggest that Biden would loosen America’s grip on China should he take the White House, the ex-vice president made it clear that he would not immediately lift Trump's punitive tariffs on China.

It would be particularly difficult for the Democrats to swiftly restore ties with Beijing given the widespread anti-China sentiment in the US, according to the Wall Street analyst. On the other hand, the Democratic Party is also being pressured by the GOP, which is wrapped up in trying to prove alleged election fraud.

"With Biden as President, should that actually happen, Democrats understand that enraged Republicans and Independents who supported Trump and will feel the 2020 election was stolen will subject Biden to withering punishment via hearings and other forms of investigations", Ortel says.

According to the analyst, it's important to prevent any foreign power from "buying" American politicians and their family members since this could present a substantial security threat to the US.