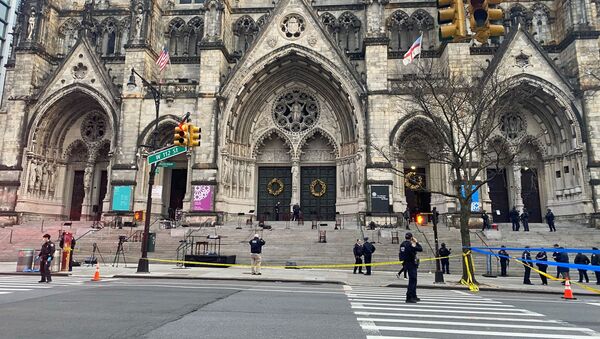 Asya Geydarova
Editor
All materialsWrite to the author
According to media, citing NYPD, no officer or civilian was injured as a result of the incident. Police have asked locals to avoid the nearby area, adding that traffic delays are likely there.

A man opened fire in the area of W 112th St & Amsterdam Ave on Upper West Side, NYC, at about 3.55 pm, media reported on Sunday, adding that the police have seriously injured the shooter.

Police have yet to confirm his condition.

According to New York Daily News, the incident took place either inside or near the famous Cathedral of St John the Divine, where a Christmas carol performance was being held at the time. The performance took place outdoors on the front steps of the church, since it is now closed due to COVID-19 restrictions.

ABC News reported that the suspect opened fire at law enforcement officers when they arrived at the scene on Sunday and police returned fire, wounding the shooter.

"The individual was discharging a firearm at the location", an NYPD spokesperson told Sputnik, adding that police returned fire and injured the shooter who was then taken to a nearby hospital in "critical" condition.

People should keep the area clear as police continue their investigation. Please stay away from the Cathedral area at this time. https://t.co/DK9mp6Q1as

BREAKING: he NYPD's 26th Pct has neutralized an active shooter that was on the scaffolds of a Cathedral Church located on West 112 St. & Amsterdam Ave. in Manhattan.

The shooter was reportedly targeting MOS. No officers were injured during the shoot-out pic.twitter.com/PgDiZVezeF

ADVISORY: Please avoid the area of West 112 Street and Amsterdam Avenue in Manhattan due to a police involved shooting. Expect a large police presence and traffic delays in the area. pic.twitter.com/7qGqv3iDEr