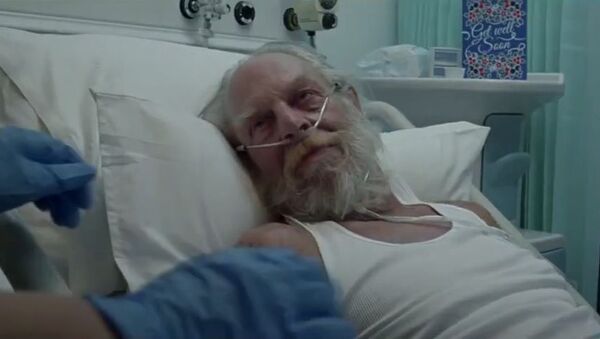 Max Gorbachev
All materialsWrite to the author
The commercial was created by NHS Charities Together, a collective of charity organisations that support the UK National Health Service by raising funds for hospitals, volunteers, and patients. According to its website, every day, thanks to its projects, it donates $1.3 million to Britain’s public health service.

It would seem that it’s hard to make a bad Christmas advertisement, as it's one of the most beloved holidays in the world, uniting families and letting people forget about their problems for several days. Yet a commercial created by NHS Charities Together has drawn a lot of negative comments, with users accusing it of hijacking Christmas and attempting to kill Santa Claus.

The ad, titled "The Gift", begins with an old man being rushed into an intensive care unit with doctors trying to save his life, presumably from the coronavirus. The commercial then shows the patient’s recovery process and how he is cared for by a kind nurse. At first, nothing suggests that the patient is Santa. Viewers only get subtle hints - a get-well post-card from Rudy (the red-nosed reindeer), or the way the old man reads a heap of letters and writes something in his notebook. However, when the old patient is discharged from the hospital, the caring nurse receives a present with a note:

"Thank you for everything you’ve done for all of us. Santa".

Although the ad was praised by some social media users, many didn’t like it (to put it mildly).

Wtf is wrong with these jerks?

​The main complaint was that people have had enough of this year's doom and gloom and Christmas is a time of joy and festivity. Some users argued that the money used to produce the ad should have been donated to the UK National Health Service.

Totally agree Tonia, but it's not just that ad, there are dozens of 'begging' ads that are messing with so many of us. We know animals are at risk, cancer is a killer, mental health is an issue etc etc. Being bombarded with these just makes more people anxious and depressed.

Many netizens also wrote that the commercial traumatises children, who have suffered from unprecedented levels of depression and anxiety.

I have to say that is a new low. The kids need this Christmas just to enjoy after the year of not seeing their friends and grandparents etc. I’m all for the NHS but really??

Anxiety in children has gone through the roof since covid. This is an awful advert, it should be taken down.

​One user claimed that the ad is as bad as lying to kids that Santa Claus is real. (Don’t listen to him. He is real!)

Surely its equally bad to mess with kids minds telling them that Santa is real in the 1st place.

​Still others praised the commercial for speaking the truth.

Why should this advert be slammed? This ad shows that the virus is real and that anyone can catch it. (even Santa)
Also it's a true tribute to those on the front line, who deserve our thanks for all they have put themselves through.
Not scare mongering as people make out.

​Following the torrent of angry comments, the charity organisation released a statement apologising to parents and children "who have been upset by watching the ad".

"We created our Christmas campaign to highlight the ongoing commitment and hard work of NHS staff and volunteers to keep us safe and well in what has been and continues to be a really challenging time for the NHS. The ad has been made to engage charity supporters and those who may want to buy products that generate donations to the appeal. It isn’t aimed at children and hasn’t been shown on TV. The charity did not put any funds into the production of the ad", the charity said in a statement.