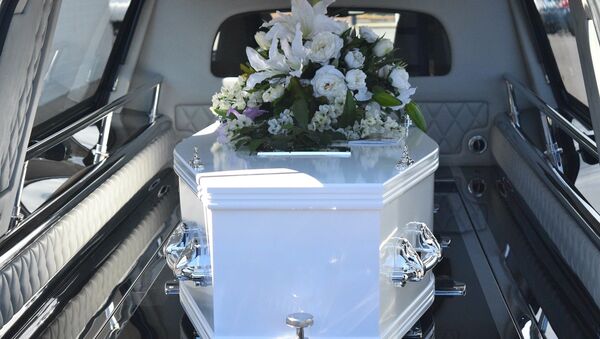 Evgeny Mikhaylov
All materialsWrite to the author
Despite the obvious problem of reciting wedding vows, a man and a woman were posthumously declared husband and wife, with the newlywed bride’s dead body then moved to her new spouse’s grave.

A family in China's Hebei Province dug the corpse of their daughter out of her grave and sold her body for a bizarre betrothal ritual, the newspaper Orient Today reported.

Kang Cuicui committed suicide after having an argument with her husband, Li Zhong, in 2008. Li and his family reportedly spent $15,000 for her funeral ceremony, buying her golden jewellery to wear in the grave. However, in November they discovered that the gold had been stolen - as well as the corpse of the woman.

An investigation conducted by the local police showed that Kang's parents had dug up the grave and then sold her dead body for 80,000 yuan (around $12,200) to another family, who had lost an unmarried son in a car accident. They performed a Yin Hun, or a "ghost marriage" - an ancient Chinese ritual to ensure that the souls of lonely people won't be alone on the other side.

According to the report, Kang's mother was angered by Li's decision to bury her daughter in a lone grave.

"You moved your family graves and left my daughter's grave there", the parent said. "If I can't move her grave, I have to get her out of there. I can't let her be a lonely ghost in the wild", she said.

Local tradition has it that a sole grave can bring bad luck to the family of the deceased, while a "ghost marriage" is believed to be beneficial for both the living and the dead.