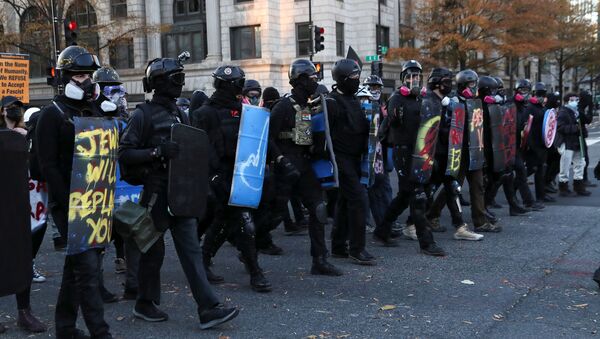 On Saturday, supporters and opponents of US President Donald Trump held duelling rallies in the US capital with mobile police units criss-crossing the city in an attempt to separate the parties.

Protesters were reportedly throwing smoke bombs and projectiles at each other. High police presence was witnessed at the scene, with officers stuck in the middle of the crowd of angry protesters.

Footage of violent clashes that took place on Saturday afternoon between Trump supporters and counter-protesters at BLM Plaza in Washington, DC https://t.co/p3vO4GwlQz pic.twitter.com/KUnopafQNy

Earlier, the police were trying to prevent street brawls by cordoning off the anti-Trump rally in front of the White House. Law enforcement officers, some on bikes for extra mobility, did not allow anyone, including reporters, inside the area.

MAGA-protesters, for whom it's been the second march following the 3 November election, were chanting "stop the steal" and demanding "four more years" for incumbent President Donald Trump, as he insists his victory was "stolen" by Democrats via mass fraud and irregularities.

The rival rallies are being held a day after the US Supreme Court rejected a Texas lawsuit seeking to overturn Biden's victory in the four states of Georgia, Michigan, Pennsylvania, and Wisconsin. The lawsuit was supported by incumbent President Trump, who has been challenging the election results in several battleground states for more than a month now.