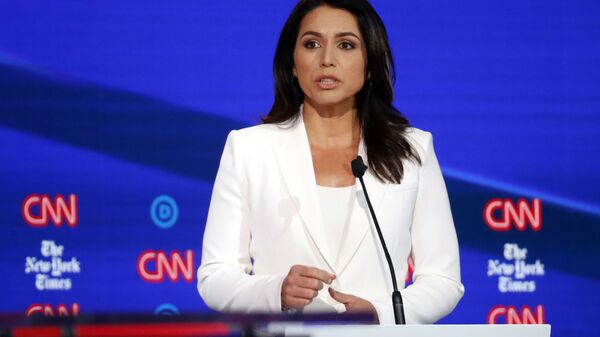 Morgan Artyukhina
All materialsWrite to the author
Just last year, the Hawaii representative co-sponsored a bill designed to ban the kind of exclusion that this bill introduced on Thursday aims to engineer, and critics aren’t letting go of the contradiction in her positions.

US Representative Tulsi Gabbard (D-HI) is facing backlash after introducing a bill aiming to exclude trans women from competing in women’s sports, contracting a longstanding claim she was a supporter of LGBTQ rights. Gabbard, who did not seek reelection, has just weeks before she leaves office.

On Thursday, Gabbard and Rep. Markwayne Mullin (R-OK) introduced a bill they claim would strengthen Title IX of the Education Amendment Acts of 1972, a federal civil rights law that protects against discrimination or exclusion based on a person’s sex. Titled the “Protect Women’s Sports Act,” the bill would amend the 1972 law to make it a violation of its protections “to permit a person whose biological sex at birth is male to participate in an athletic program or activity that is designated for women or girls.”

A similar bill was introduced in the Senate in September by Sen. Kelly Loeffler (R-GA), and similar bills have been introduced in more than a dozen state legislatures this year. In March, Idaho became the first to pass the bill into law, but in August, a federal judge in Idaho blocked its implementation.

“Title IX is being weakened by some states who are misinterpreting Title IX, creating uncertainty, undue hardship and lost opportunities for female athletes. Our legislation protects Title IX’s original intent which was based on the general biological distinction between men and women athletes based on sex,” Gabbard said in a Thursday statement. “It is critical that the legacy of Title IX continues to ensure women and girls in sports have the opportunity to compete and excel on a level playing field.”

The question of whether or not Title IX includes transgender people, whose gender is not the one they were assigned at birth, has become a political tug-of-war in the last few years. In 2016, when Barack Obama was still US president, the US Department of Education issued new guidance saying that Title IX protected the right of trans people to use the bathroom of their chosen gender. The following year, when Donald Trump became president, he quickly reversed the decision.

However, in June 2020, the US Supreme Court settled the issue by ruling on a trio of cases that the Civil Rights Act of 1964 protects LGBTQ people against workplace discrimination. The ruling used the law’s sex-based language to include protections against bigotry based on sexuality and gender as well. The Idaho District Court’s ruling mentioned above referenced the decision.

"The State has not identified a legitimate interest served by the Act that the preexisting rules in Idaho did not already address, other than an invalid interest of excluding transgender women and girls from women's sports entirely, regardless of their physiological characteristics," US District Judge for the District of Idaho David Nye wrote.

At issue is the question of whether or not trans women have an unfair athletic advantage over cisgender women due to aspects of their physiology that would seemingly violate the fairness prescriptions at the heart of legislation like Title IX. While firm conclusions are still out, those studies that have been done point to hormone replacement therapy (HRT), by which testosterone production is suppressed and replaced by estrogen, reducing the physical performance of trans women to well below that of cis men.

“Ultimately, the trans athlete debate rubs against the sexist social belief that men are born physically superior to women,” journalist Katelyn Burns wrote in Vox in October, noting that the spectrum of height alone contains enough overlap between men and women as to make generalizations about trans people’s physical attributes impossible.

“Part of the problem on the anti-trans side is that they’re starting from the base assumption that trans women are men, and substitute cis male physical traits when discussing whether trans women may have competitive advantages,” she wrote. “They’ll argue that men have bigger hearts and more lung capacity, or produce more red blood cells on average than cis women, and then assume trans women’s bodies would be the same. But initial scientific findings don’t necessarily support that.”

One study published in the Journal of Sporting Cultures and Identities in 2015 found that years of HRT can reduce the amount of blood pumped by the heart with each beat, impacting athletic performance. However, another study found in the shorter term that HRT can take longer than a year to reduce the muscular abilities of trans women athletes to those of cis women, but also found they quickly become inferior to the abilities of the cis men they would be expected to compete against under the rules of Gabbard’s bill.

News of the bill brought no shortage of ire on social media, as critics pointed out Gabbard’s longstanding claim to have rejected her past anti-LGBTQ beliefs was now rendered invalid and noted this was just one more issue on which she was out of step with the Democratic Party.

Usually, when I've criticized Tulsi Gabbard in the past for her heinous record and positions, I've had her fans bombard me with nonsense. It'll be interesting to see how quiet they remain over this. Because trans people are just bargaining chips, right? All we ever were to them.

​“Usually, when I've criticized Tulsi Gabbard in the past for her heinous record and positions, I've had her fans bombard me with nonsense. It'll be interesting to see how quiet they remain over this. Because trans people are just bargaining chips, right? All we ever were to them,” Clymer continued.

"Remember when Tulsi Gabbard tried to convince us she was an LGBTQ ally?" wrote Zeke Stokes, the former chief program officer for GLAAD, an LGBTQ advocacy group. "We knew she was a liar, a fraud. Here’s the proof."

Remember when @TulsiGabbard tried to convince us she was an LGBTQ ally? We knew she was a liar, a fraud. Here’s the proof. https://t.co/PA9Ski02cL

​Human Rights Campaign gave Gabbard a 100% on their voting scorecard for the 115th Congress, whose term ran from January 2017 to January 2019 - a fact she made sure to tout at Democratic presidential primary events in September and October of 2019 that focused on LGBTQ rights. However, many expressed skepticism at her claim to have renounced her prominent anti-LGBTQ views from earlier in life.

Ironically, just last year, Gabbard co-sponsored the Equality Act, a sweeping civil rights bill that would have banned discrimination on the basis of sexual orientation and gender identity in education, employment, housing, credit, federal jury service, public accommodations and the use of federal funds.

“Too often, the LGBTQ community still faces discrimination in the workplace, in education, or when trying to find a home,” Gabbard said in a March 2019 news release accompanying introduction of the Equality Act. “It’s long overdue that we extend civil rights protections to the LGBTQ community and ensure equal treatment for all Americans under the law - regardless of race, sexual orientation, gender, religion, disability, or national origin.”