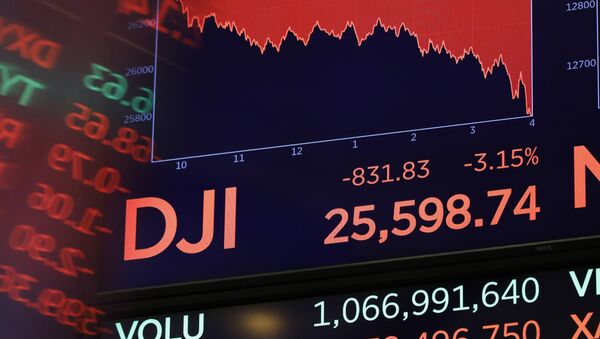 Max Gorbachev
All materialsWrite to the author
The fall in the United States comes as European markets also dropped due to uncertainty surrounding the negotiations between the United Kingdom and the European Union on a post-Brexit trade deal.

Wall Street's main indexes have opened lower amid delays to a new fiscal stimulus package and a surge of coronavirus infections and deaths. The Dow Jones Industrial Average fell 0.22%, at 29,934.49 after the market opened, while the S&P dropped to 0.44%, to 3,652.10. The biggest fall was recorded by Nasdaq Composite. It dropped 0.53%, to 12.340.35. The indexes opened lower despite news that the US Food and Drug Administration is close to giving a green light to emergency use for a coronavirus vaccine developed jointly by Pfizer and BioNTech.

The United States is one of the worst affected countries by the coronavirus, with both the highest number of infections (15.6 million) and death toll (more than 292,000). The pandemic has also caused the worst economic crisis since the Great Depression. However, after six months of negotiations, the Democrats and the Republicans still can’t reach an agreement on a stimulus package that would provide aid to local governments, companies, and jobless citizens.

Among the points of contention are the price tag of the whole stimulus package, as well as aid to state and local governments and a liability shield for companies and corporations from the coronavirus-related suffering.

Legislators wanted to include the package in a broader omnibus bill that would fund the government into next year.

However, both sides are also at odds over the government funding bill, and if they fail to reach a compromise and pass the bill, the federal government will shut down on 11 December.