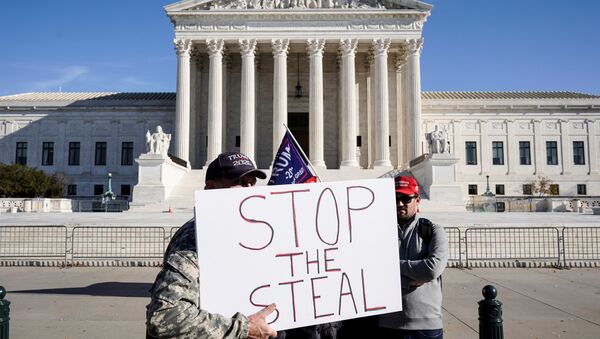 Asya Geydarova
Editor
All materialsWrite to the author
The lawsuit sought to override Biden's victory, claiming the states' authorities had violated their own statutes by delaying the deadlines for counting the votes and sending mail-in ballots to all registered voters because of the ongoing coronavirus pandemic.

The US Supreme Court has rejected a lawsuit filed by Texas authorities contesting the election outcome in the key battleground states of Georgia, Michigan, Pennsylvania, and Wisconsin, Reuters reported.

The suit was filed by Attorney General of Texas Ken Paxton on 9 December, calling on the Supreme Court to invalidate the results in the aforementioned states.

"The State of Texas's motion for leave to file a bill of complaint is denied for lack of standing under Article III of the Constitution. Texas has not demonstrated a judicially cognizable interest in the manner in which another State conducts its elections. All other pending motions are dismissed as moot", the court order said on Friday.

All three judges appointed by President Donald Trump sided with the majority in rejecting the lawsuit.

Paxton later reacted to the decision, saying it is "unfortunate" that the Supreme Court had rejected his lawsuit. Texas Republican Party Chairman Allen West also commented on the order, saying it has now created a precedent for future "violations" of the US Constitution by states.

"Perhaps law-abiding states should bond together and form a Union of states that will abide by the constitution", West suggested.

President Donald Trump on Friday expressed hope that the Supreme Court would demonstrate "wisdom and courage" by greenlighting the lawsuit, adding that it would "save the USA". Trump had earlier pledged to intervene in the lawsuit while it was pending a decision by the Supreme Court.

If the Supreme Court shows great Wisdom and Courage, the American People will win perhaps the most important case in history, and our Electoral Process will be respected again!

At least 17 US States and more than 100 House Republicans expressed support for the lawsuit contesting the 62 Electoral College votes obtained by Democrat Joe Biden in Georgia, Michigan, Pennsylvania, and Wisconsin. The lawsuit cited witness accounts of irregularities, poll watchers reportedly not admitted to the counting process, suggested inconsistencies with the Dominion machine system, and other alleged violations. Based on this, the suit called on the Supreme Court to disqualify the election results in these states.

While all 50 US states and the District of Columbia have certified their election results, showing Joe Biden as the president-elect, President Trump has said the election was "rigged" by Democrats in favour of their own candidate. His team has filed lawsuits in the battleground states where they believe mass fraud and irregularities took place, though so far, they've all been rejected by the court system.

No Presidential candidate ever came even close to losing an Election who won Iowa, Florida and Ohio. I won all three, by a lot!

In theory, there is still a slim chance that Trump could secure victory via so-called "faithless electors" - if the Electoral College, set to meet on 14 December, decides to ignore their states' certified results and votes for Trump. This would, however, certainly be appealed by Democrats to the Supreme Court.