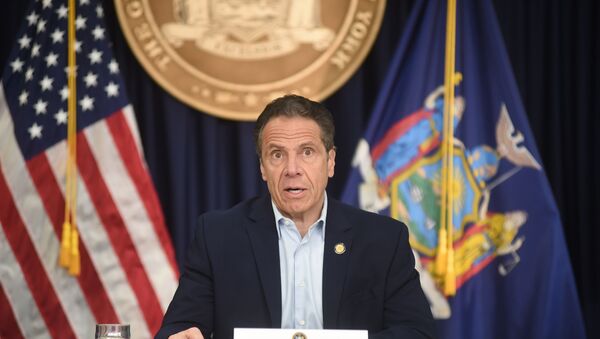 The New York governor has warned for weeks of surging COVID-19 case counts reminiscent of the spring outbreak that turned the state into a hotspot for the pandemic. He said hospitalizations for the virus topped 5,000 in the state on Thursday, the first time since the spring surge.

"This [could] last nine to 10 months," Cuomo said on Friday. "It could be September, but between today and June, that is a long six months. We can't get complacent, thinking: 'Well, the vaccine is here, everything is fine'. That's not the reality. We have another six months to go. If the facts change, we will adjust to the facts."

At the peak of the COVID-19 outbreak in April, New York reported about 10,000 positive cases a day. It also had about 18,000 people in hospital and faced roughly 800 deaths a day from the virus.

New York City to Close Indoor Dining as Coronavirus Spike Continues
Cuomo also said Friday that New York’s state clinical advisory team had unanimously endorsed a decision by a US Food and Drug Administration (FDA) advisory panel on Thursday to allow emergency use of Pfizer's coronavirus vaccine on Americans aged 16 and above.

The FDA panel approval came nine months into a pandemic that has infected more than 15 million Americans and killed almost 300,000 of them. If the FDA gives the full greenlight to Pfizer, the drugmaker could deliver shots into Americans' arms by the weekend.

US Health Secretary Alex Azar told a Fox News interview earlier on Friday that the White House has contracted for 800 million COVID-19 vaccines from five drugmakers in all, with options to get up to 3 billion doses.

Cuomo, commenting on the availability of vaccines for the virus, said one problem New York has is convincing its near 20 million people to take them.

Azar said the White House expected to have some 100 million Americans immunized against the virus by the end of February.