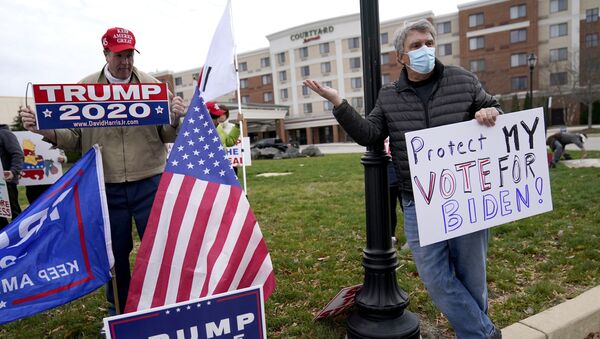 © AP Photo / Julio Cortez
Subscribe
Chris Summers
All materialsWrite to the author
The United States held a presidential election on 3 November with incumbent Republican Donald Trump getting 74 million votes and Joe Biden, the Democratic challenger, receiving 81 million. But the question of who becomes the next president is still up in the air.

On Monday 14 December the US presidential election should finally reach its denouement when the Electoral College voters in all 50 states are due to meet to cast their ballots.

Federal law says the Electoral College has to meet on the first Monday after the second Wednesday in December.

Great. Most corrupt Election in history, by far. We won!!! https://t.co/nGMMaRQmz8

​In previous years it is a date which passes off without comment because the loser on election day has usually long since conceded - except in 2000, when Al Gore and George W. Bush were neck-and-neck on electoral college votes with only Florida left to call and Bush fractionally ahead.

On 12 December 2000 the Supreme Court ruled it was unconstitutional of the Florida Supreme Court to order another recount of ballots, which meant Bush became the 43rd President.

Trump is Going to Go Down Fighting

But this year Donald Trump and his White House team have claimed throughout that the election has been stolen from them by allegedly nefarious voting practices.

​Trump was ahead on election night but as more and more mail-in votes came in he gradually found himself falling in behind in Michigan, Wisconsin, Arizona, Georgia and most importantly Pennsylvania.

Trump and his lawyer, Rudy Giuliani, challenged the fairness in all those states and insisted on a recount in Georgia.

Now that 17 GOP attorneys general have joined this futile lawsuit, it’s time to say it: If you won’t live with the state-by-state results the Electoral College produced, we’ve got a Plan B. It’s called the POPULAR VOTE, which Biden won by > 7M votes. You can’t have it both ways! https://t.co/TazTunqC0a

​But by Tuesday, 8 December - the “safe harbour” deadline day - the election officials in all the contested states confirmed the results were clear and Biden had won 306 electoral college votes to Trump’s 232.

The Trump campaign, and many of his supporters, have not however accepted defeat. 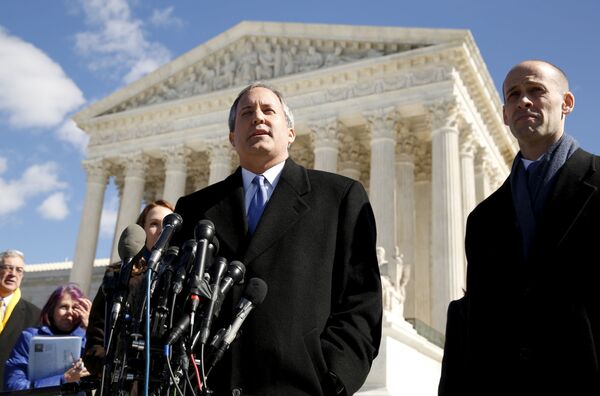 On Wednesday, 9 December, the Attorney General of Texas, Ken Paxton, filed a lawsuit challenging the 62 Electoral College votes in Georgia, Michigan, Pennsylvania, and Wisconsin and calling for them to be invalidated.

“People are upset, and they have a right to be. Georgia not only supported Trump in 2016, but now. This is the only State in the Deep South that went for Biden? Have they lost their minds? This is going to escalate dramatically. This is a very dangerous moment in our history....

​The US Supreme Court is expected to rule on the challenge later on Thursday, 10 December, and if it fails Trump and the Republicans have one last shot, although it would likely trigger a constitutional crisis.

'The Winner Takes It All'

They could ignore the official election call in the four disputed states and hand the election to Trump.

Romney erupts amid GOP threat to protest electoral college vote: “Recounts are appropriate. Pursuing every legal avenue is appropriate. But trying to get electors not to do what the people voted to do is madness.”

​On 14 December each state’s electoral college electors turn up in person and are supposed to cast their ballot on the basis of the “winner takes all” scenario.

There are only two states which have an exception to this rule - Nebraska and Maine, which are allowed to split the electoral college by their state laws.

The electoral college formally votes in eight days. 306 votes for Biden, 233 for Trump.

SCOTUS has ruled 9-0 against faithless electors voting for someone other than the winner of their state's popular vote too, so you can give up THAT fever dream.

​For the other 48 states they are supposed to vote for Trump or Biden, depending on who won the popular vote in those states, according to election officials.

So in 2016 when Hillary Clinton won the most votes in California all of the state’s 55 electors cast their votes for her, while Florida voted for Donald Trump and therefore got 29 votes from its electors.

But across the country 10 maverick electors refused to cast their votes for either Trump or Clinton - these are known as "faithless" electors.

In 2016 these faithless electors opted for Bernie Sanders, Ron Paul, John Kasich, Colin Powell or in one case Faith Spotted Eagle, a Native American activist and opponent of the Dakota Access pipeline.

​But in July 2020 the US Supreme Court ruled unanimously against the 2016 faithless electors, who had claimed the Founding Fathers had meant for an elector’s choice to be a matter of discretion.

Are Faithless Electors Set to Be Stars of 2020?

Justice Elena Kagan, who wrote the Supreme Court’s decision, said of the Founding Fathers’ original philosophy: "All that they put down about the electors was what we have said: that the states would appoint them and that they would meet and cast ballots to send to the capitol. Those sparse instructions took no position on how independent from - or how faithful to - party and popular preferences the electors’ votes should be."

The punishment for faithless electors differs across the US but it tends to be a maximum of a US$1,000 fine and a ban on being in the electoral college in future.

🍾🥂 but still not out of the swamp yet. I keep reading about how senators can object to electors replacing them with legislature picked ones and of course faithless electors have such little consequences.

​The electoral college electors are chosen by the state legislatures.

The Republicans control the legislature in five of the controversial states - Georgia, Michigan, Pennsylvania, Wisconsin and Arizona.

To Overturn or Not to Overturn

So on Monday the legislature in those states could nominate Republican electors on the assumption they would vote for Trump, despite the official acknowledgement that Biden won all five states.

Trump, who on Wednesday tweeted OVERTURN, would no doubt support an act which many Americans would see as seditious.

There may be a lot more to the delusion than people think... #25thAmendmentNow pic.twitter.com/I8F1m7NOxr

​The Democrats would inevitably appeal and take the matter to the US Supreme Court, which would be asked to rule whether the votes cast by these faithless electors should stand.

It would lead to rancour and bitterness never before seen in US politics.

But then the 2020 election campaign has been a campaign the like of which has not been seen before.