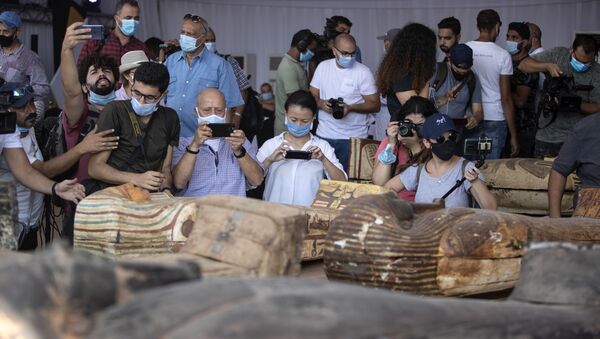 Max Gorbachev
All materialsWrite to the author
According to local media, the event was organised as part of the president's decree "to complete international archaeological and cultural activities" as well as ongoing efforts to modernise Egypt's capital Cairo and other ancient cities.

Egypt has transported 22 royal mummies to their new home in a grandiose event attended by ambassadors from different countries and the international media. The procession started at the Egyptian Museum in Tahrir Square and then headed to the National Museum of Egyptian Civilisation in the historic city of Fustat. Moamen Othman, head of the museum sector at Egypt's Supreme Council of Antiquities, said the artefacts were placed in special units that prevented the mummies from sustaining any damage during transportation.

#SceneSpotted: In the dead of night, in the heart of Tahrir, intrepid photographer Mohamed Ramadan was able to capture these pictures of a number of vehicles, all glitzed up like Ancient Egyptian royalty, in preparation for a procession of mummies happening this weekend. pic.twitter.com/CtSLfIyqfF

​The procession was accompanied by 17 royal coffins dating back to the 17th, 18th, 19th, and 20th dynasties as well as a marching band. According to local media, authorities rehearsed the event for more than two weeks. Among the mummies transferred were the remains of King Ramses II, Ramses III, Ramses IV, King Seqenenre Tao II, Queen Ahmose Nefertari, Queen Meritamen, King Amenhotep I, and others.

Prior to the transportation, the Egyptian Ministry of Tourism and Antiquities moved 35,000 artefacts to the National Museum of Egyptian Civilisation, a joint project by the Egyptian authorities and UNESCO. It will become one of the most important and largest archaeology museums in the world, with more than 50,000 artefacts from Egyptian civilisation – from the earliest times to the present day.