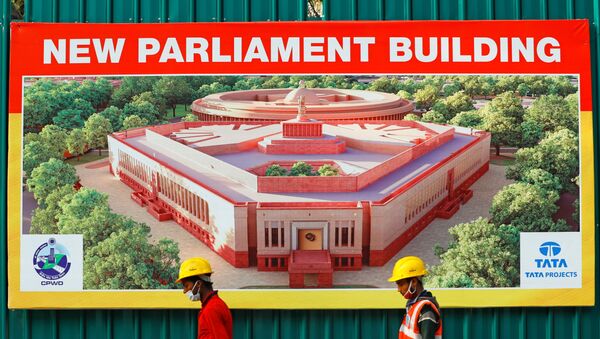 Dhairya Maheshwari
All materials
India’s existing parliament building was built by British colonial architects Edwin Lutyens and Herbert Baker in 1927. Prime Minister Narendra Modi’s government, however, says that it would like to hold the first session of parliament on India’s 75th Independence anniversary in 2022 in a new parliament building that has been developed by Indians.

The formal inauguration of India’s new parliament complex on Thursday is a sign of an ever-narrowing gap between the state and religion and presents “discomforting” omens for Indian democracy, Nilanjan Mukhopadhyay, a biographer of Prime Minister Narendra Modi, has told Sputnik.

“Religion and the state are becoming increasingly synonymous. The two narratives are increasingly converging and the new Parliament building is a step in that direction”, explains Mukhopadhyay, who has written extensively on Hindu nationalism.

“As we have seen from the speech of Lok Sabha Speaker Om Birla, he says that the new Parliament will be the temple of democracy. The signs are already there”, says the political analyst, noting that the completion of Ayodhya’s Ram Temple, another crucial project for the Bharatiya Janata Party (BJP), is also on the cards.

Birla has been quoted as saying in Indian media this week that the new parliament is expected to be completed by 2022, which will also be 75th year of India's independence. The Ram Temple, another grand project close to the heart of the BJP and its Hindu nationalist supporters, is expected to come up in 2023, just ahead of the next federal election planned for 2024.

Mukhopadhyay highlights that an “all-faith ceremony” was also organised to lay the cornerstone of the project on Thursday.

The remarks come against the backdrop of Prime Minister Narendra Modi laying the cornerstone of India’s new parliament building in Delhi. According to the Press Trust of India (PTI) news agency, the new building is set to cost nearly $131 million and have room for 888 members in the lower house (Lok Sabha) as well as 384 in the upper chamber (Rajya Sabha).

All You Need to Know About Delhi Getting a New Parliament Building Under Narendra Modi Gov't
The seating capacity of the current Lok Sabha chamber is 543, while the Rajya Sabha hall can only accommodate 245 members.

The massive infrastructure upgrade, coming at a time when New Delhi faces its first technical recession in decades, has raised eyebrows for not only the “economic logic” behind such a project, but also because of apparent “political impropriety”.

He says that the writing on the wall for the legislature could be that they will have to be “mindful” of the executive in the coming days. “It is very much like what we are seeing with the judiciary. Their decisions these days seem to be very mindful indeed of the executive”, states Mukhopadhyay.

Mukhopadhyay also reckons that erecting a new parliament building as the country battles an economic downturn doesn’t make “much sense”.

"It shows the skewed priorities of the federal government. I don’t believe it is a wise move”, opines the expert.

The new parliament building is part of an overall "Central Vista" plan to revamp New Delhi’s federal district. According to estimates, the infrastructural upgrade is expected to cost nearly $2.7 billion.

Many activists have challenged the project in India’s apex court, arguing that there would be implications for the preservation of colonial-era architecture as well as the environment.

The federal government assured the Supreme Court this week that it would not commence construction on the project until all the petitions have been heard.