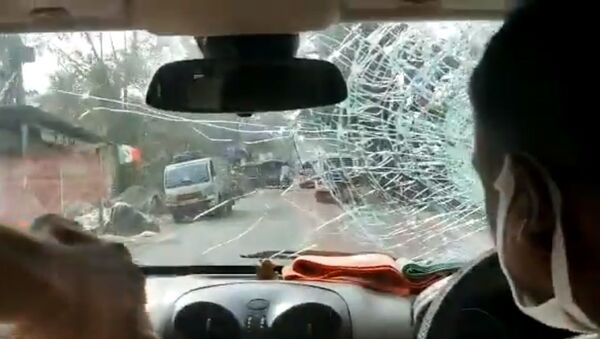 Radhika Parashar
All materialsWrite to the author
Amid raging protests by thousands of farmers in Delhi and the COVID pandemic, the political and social climate of India is at a sensitively tricky point. The opposition is vocal about key decisions by the central government, dividing Indians in their opinions.

The convoy of Jagat Prakash (JP) Nadda - the 60-year-old national president of the ruling Bhartiya Janata Party (BJP) – was pelted with stones on Thursday during his West Bengal tour.

The Delhi-based politician arrived in the state of West Bengal earlier on Wednesday on a two-day visit, with an eye to meeting and addressing party leaders and meetings in the run-up to the state assembly elections.

The politician's convoy was attacked in the state's South 24 Parganas district. A video recording of the incident from inside the car was later tweeted by the official handle of BJP Bengal, which pointed the finger at the state's governing party, All India Trinamool Congress (TMC).

The BJP alleged that West Bengal State Chief Mamta Banerjee had sent her "goons" to execute the "shameful" attack.

TMC goons attacked Kailash ji at Sirakal more, Diamond Harbour. Aimed bricks at him. Why Pishi and Bhaipo are so scared? Shameful act of cowardice! Clearly Pishi & her goons are fearful of people’s support for BJP in West Bengal. #BengalSupportsBJP pic.twitter.com/v9hblXevu9

West Bengal Governor ​Jagdeep Dhankar said that he is concerned at the "alarming reports of anarchy and lawlessness".

​The BJP further went on to allege that its workers had been beaten up by TMC cadres in Diamond Harbour in the South 24 Parganas district and that the party banners put up ahead of Nadda's visit were torn down by TMC members.

At present, the attackers have not been identified and an investigation into the incident has been opened.