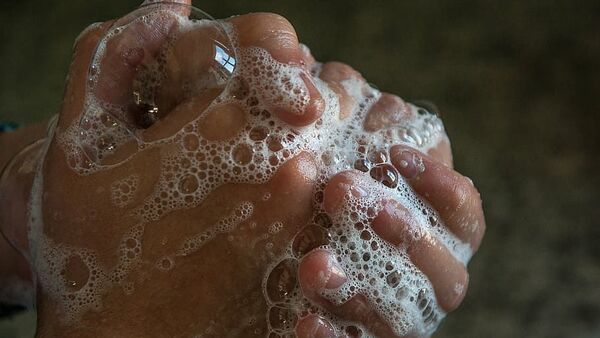 CC0 / /
Subscribe
Gaby Arancibia
All materialsWrite to the author
Since the onset of the COVID-19 pandemic, the US Center for Disease Control and Prevention (CDC) has reiterated the importance of washing one’s hands, underscoring that individuals needed to wash with soap or hand sanitizer for at least 20 seconds in order to help curb the deadly virus’ spread.

A new survey released by marketing research company OnePoll has determined that about 1 in 5 Americans are cleaning their hands so often since the start of the pandemic that their hands have bled due to the cleansing routine.

Commissioned by hand sanitizer company Muse Health, the survey polled approximately 2,000 Americans on their daily handwashing practices and looked into how individuals have changed their measures after certain activities, such as shopping for groceries and using door handles, amid the pandemic.

The survey determined that the average American washes their hands about 10 times a day, and that they also use hand sanitizer on an additional eight occasions - two practices which make it not entirely surprising that more than half of those surveyed said their hands have become much drier over the last several months.

Some 57% of respondents also indicated that they only used hand sanitizer after touching shopping carts, car doors, turnstiles or door handles, among other public surfaces; however, some 22% noted that regardless of whether the surface is public, they’re lathering on their alcohol-based cleanser.

Early on in the pandemic, the CDC released alerts that urged individuals to thoroughly wash their hands for a period of at least 20 seconds, noting that not only do one’s palms need to be cleaned, but that also the backs of one’s hands, fingernails and the skin between fingers need to be washed.

At one point, health experts recommended singing a song, like “Happy Birthday,” to ensure that one was washing their hands for an acceptable amount of time - not just a quick rinse before hopping back to business.

With the CDC advisory in mind, the survey found that the majority of the respondents did agree that they were washing their hands much more often this year than they had ever before. Sixty-four percent of the group described the pandemic as turning them into “a bit of a germaphobe.”

“While it might feel like it’s become second nature by now, continuing to be vigilant about keeping hands clean across a variety of contexts – from home to work to the grocery store and beyond – will be imperative to curtailing the pandemic this cold and flu season,” Bruce Albert, chief science officer of Muse Health, said in a statement to Study Finds.

Albert further noted that while many are quick to grab their bottle of sanitizer, consumers need to select supplies that have “moisturizing agents like vitamin E, lime oil or glycerin” to prevent dry skin, which is an objective of Muse Health’s products.

The American Academy of Dermatology Association has suggested that when going through their handwashing routine, individuals can leave their hands slightly damp after drying, at which time they can hydrate their skin by applying a moisturizer.

The association strongly warns against using scented moisturizers, as they can allow skin to become even more irritated.

Incidentally, an August OnePoll survey that polled 2,000 British adults found that while the majority of participants agreed they noticed a stark increase in their handwashing, a concerning 12% of individuals stated that they didn't wash after using a public or private bathroom.