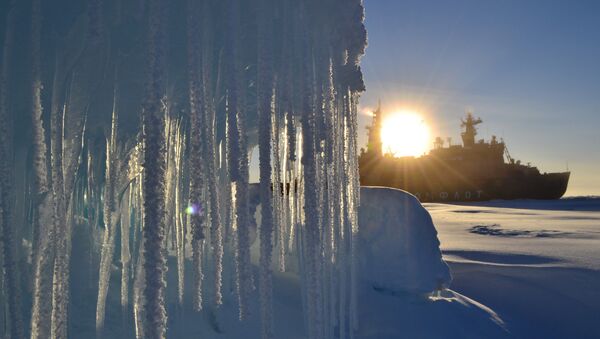 WASHINGTON (Sputnik) - The United States is considering a plan to lease ice-breaking security cutters from other nations to expand its current fleet of a single icebreaker, to a flotilla capable of protecting American interests in the far north, Coast Guard Vice Commandant Adm. Charles Ray told Congress.

"The strategy that makes the most sense to the Coast Guard is this potential to lease one of these icebreakers", Ray said in an exchange triggered by Senate Commerce Subcommittee on Security Chair Senator Dan Sullivan, who asked whether a friendly Arctic nation such as Finland should be exempted from a law requiring that American military ships be built in the United States.

“It’s no secret that Finland has boasted, apparently with some ability to back it up, they can build an icebreaker within two years and they could do it for less than $300 million", Sullivan said.

The United States currently possesses a single heavy-class icebreaker, the 44-year-old Polar Star, plus a medium-duty icebreaker now out of commission due to an engine room fire. In contrast, Russia operates a fleet of more than 50 icebreakers.

In August, a Russian military exercise extended into a US zone of the Bering Sea, where American fishing captains were startled and angered to hear Russians warning them to leave the area, according to media reports.

Russia
Russia's Nuclear Icebreaker Arktika to Start Sailing Northern Sea Route This Week, Rosatom Says
The US Navy and Coast Guard previously awarded a $750 million contract for the first of three new heavy icebreakers, known as Polar Security Cutters. Construction is expected to begin next year, with completion expected by 2024, according to media reports.

Plans call for a US to eventually operate fleet of six icebreakers, and to open at least two deep water ports in the far north capable of hosting the ships. At present, the closest ports in the state of Alaska are at least 1,000 miles south of the Arctic Circle, Sullivan said.

A receding polar ice cap due to climate change has set in motion a scramble to develop vast reserves of oil, natural gas and other minerals and to develop commercial shipping routes.