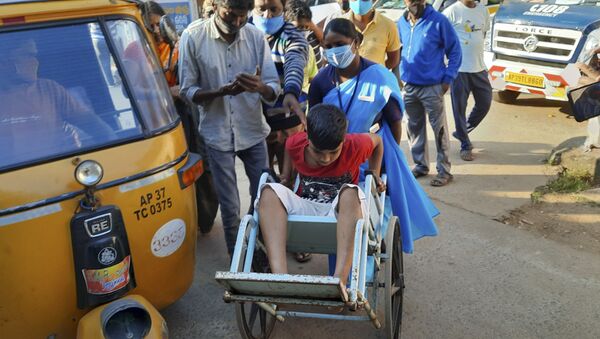 © AP Photo
Subscribe
MOSCOW (Sputnik) - The World Health Organization (WHO) experts are joining an inquiry into a mysterious illness in India, which affected hundreds of people and left one dead, a spokesperson for the organization said.

Over the weekend, Indian media reported people suffering from epilepsy-like attacks. The number of people affected by the new illness in southeastern India has exceeded 800, but it does not appear to be infectious, Dolla Joshi Roy, district surveillance officer of West Godavari district, said.

"Two surveillance medical officers of WHO are supporting the state health authorities in investigations," a WHO spokesperson said, adding that water samples were "being collected and tested."

The Indian government has sent additional medical personnel to the town of Eluru, which was impacted by the outbreak. Meanwhile, experts from the country's major research institutions are joining the probe, WHO said.

According to local media, early test data indicates that the new illness may have been linked to chemicals that can be found in pesticides.