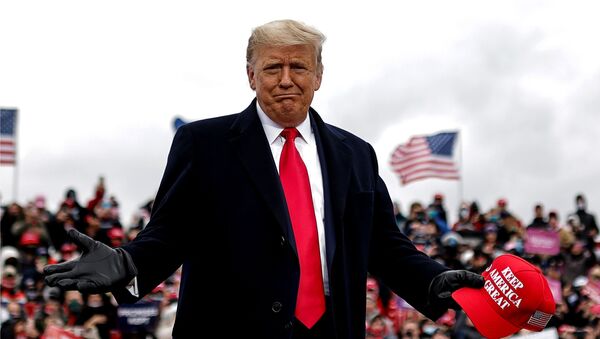 Ekaterina Blinova
All materialsWrite to the author
President Donald Trump is allegedly considering holding a political rally in Florida opposite Joe Biden's inauguration if the latter wins the White House. Political analysts have discussed the report and the potential consequences of Trump's apparent political gesture.

On 2 December, NBC News broke the news that President Trump is planning to announce a new 2024 bid to retake the White House on the Inauguration Day if Biden comes out on top, citing sources familiar with the discussions. Regardless of the timing of a campaign announcement, Trump is likely to skip the swearing-in of his potential successor, the broadcaster specified.

The alleged Florida rally could create "a split-screen moment" on 20 January 2021, Axios wrote, adding that the 2024 re-election campaign could turn Trump into Biden's critic-in-chief for the next four years. The media outlet specified, however, that the President's team declined to comment on the rumour.

"My first reaction is: when the news broke today that there might be plans in store so that President Donald Trump would stage a show-stopper kind of exit from the White House – wow, suits him well, the come-back kid never taking no for an answer," says Klaus Jurgens, a political analyst and journalist, adding, however, that he takes the report with a pinch of salt.

From a non-partisan point of view, it would be classy for Trump "finally to accept defeat, show the newly elected president plus family around the White House and of course attend the Inauguration Ceremony," according to the political analyst.

"Defeat hurts and politics is no exception; yet style matters, too," Jurgens advises, asking would it not be better to bow out with a good grace and embark on a new campaign without stealing the show.

The journalist does not rule out that Trump will not attract as much attention as he allegedly plans, as the public may say that "the season is over, a winner has been duly declared, and all else is history".

Finally, if the scenario described by NBC News and Axios came to be, it would mean that the outgoing President would overtly show disrespect to his successor which is "outrageous", according to the analyst.

At the same time, such a snub "could undermine the trust and respect in the institution of the president" per se, argues Jurgens, admitting, however, that "those who voted for Trump will love the idea and many of his Florida-based supporters will attend such a post-vote public rally".

"The danger is America will continue to be a highly polarised society and country – Donald Trump should do the right thing, congratulate Joe Biden and then kick-start his 2024 presidential campaign", he insists. Trump May Emerge as Unofficial Leader of Biden's Opposition

Assuming that the report is true, this will not be the first time an incumbent president has refused or failed to participate in his successor's inauguration, notes Jon R Taylor, professor of political science at the University of Texas at San Antonio. "It's definitely the most contentious since Andrew Johnson and Ulysses Grant's inauguration in 1869. The other two? John Quincy Adams and John Adams", he says.

However, when it comes to the Florida rally purportedly scheduled to coincide with Inauguration Day, that may indeed be an unprecedented event in American politics, according to Taylor, who believes that Trump is taking a "calculated risk" after a "highly contentious election".

If the Electoral College's majority votes for Biden, Trump is likely to hold a series of events and announce his 2024 bid either after the entity's vote or on Inauguration Day, the academic expects.

Trump appears to be following in footsteps of Andrew Jackson - "the last presidential candidate who ran a perpetual campaign" – who lost the election of 1824 to John Quincy Adams and ran against him again in 1828, according to Taylor. Having won the rematch Jackson served as the seventh president of the US from 1829 to 1837.

By kicking off a new campaign Trump may kill several birds with one stone as it will help him maintain the position of the GOP's most likely nominee and turn him into an "unofficial leader of the opposition to the Biden administration", Taylor suggests. 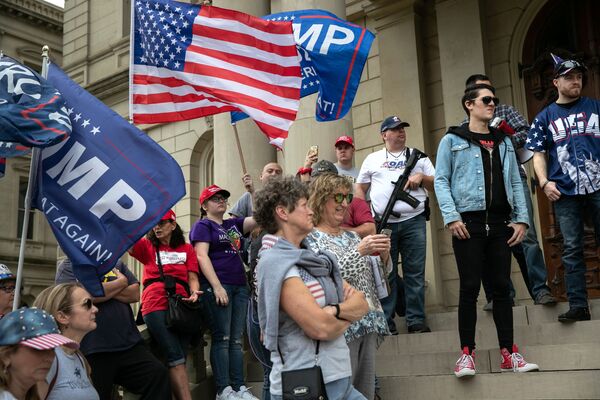 Trump supporters demonstrate at the Michigan state capitol on November 08, 2020 in Lansing, Michigan. Militia members had pledged to attend the "Stop the Steal" demonstration, claiming the presidential election had been stolen.
© AFP 2022 / JOHN MOORE

The major issue is not how exactly Trump will spend the Inauguration Day, but what the Supreme Court's final say with regard to the 2020 presidential election will be, notes Wayne Allyn Root, an American politician and bestselling author of "Trump Rules".

"I'm not worrying about what Trump does on Inauguration day until the Supreme Court has determined the winner of this election", he says. "As of now, in case you didn't notice, the media doesn't decide when an election is over".

Although the US mainstream media declared Biden the winner on 7 November, a week later Vox and Data for Progress' survey indicated that 75 percent of likely GOP voters believed voter fraud took place during the 2020 election, a statement that 43 percent of all likely voters agreed with. A Reuters/Ipsos opinion poll, conducted concurrently, showed that half Republicans think Trump “rightfully won” but the election was stolen from him  by widespread voter fraud.

Meanwhile, only 27 congressional Republicans say that Joe Biden won the election and 220 GOP lawmakers do not share this stance, according to The Washington Post's study released on 5 December.

As piles of evidence for the suspected election fraud are growing, it would be puzzling if those who stand for democracy recognise Biden as a duly elected president, according to John Zmirak, a political commentator, author, and senior editor at Stream.org.

"Assuming that the extensive evidence of voter fraud is ignored, and Joe Biden takes the White House, neither Donald Trump nor any other honest American ought to attend the Inauguration, or in any other way lend credence to this event," the political commentator says.

Trump has 74 million supporters who believe that the election was stolen and for whom Joe Biden has "zero credibility", echoes Root.

"If Trump does eventually lose (or more likely, run out of time), he will come back bigger and bolder over the next four years," he believes. "So either way, Trump wins. Every time Trump held a campaign rally, 20,000+ showed up. Biden couldn't attract 10 people to fill a phone booth. He literally had less than 20 people at rallies in Las Vegas and Phoenix two weeks before the election. His Inauguration will be poorly attended too. Trump will outperform Biden, even as Biden is being sworn in as president".