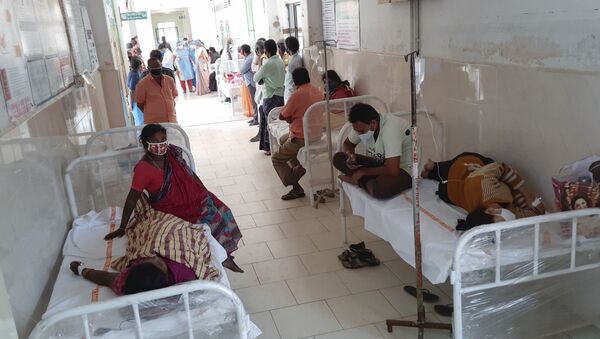 Rishikesh Kumar
All materialsWrite to the author
As health experts from India’s premiere institutions have failed to unravel the cause of the mysterious illness in the country’s southern state of Andhra Pradesh, more people continue to fall ill, increasing the burden on hospitals which are already grappling with Covid-19 patients.

At least one person died and around 500 people have fallen sick since a new mysterious illness was first reported in the 1-Town area in Eluru city of Andhra Pradesh on Saturday.

What Are the Symptoms?

Initially, as people began complaining of symptoms resembling an epileptic seizure, Indian authorities suspected that this may be caused by a contaminated local body of water. Later on, the illness spread to the adjoining rural parts of Eluru and Denduluru, although the number of affected there was far less.

Mystery Deepens as Cases of Unidentified Disease on Rise in India's Andhra Pradesh State
The number of people who have contracted the unknown disease in the ancient city of Eluru, famous for its hand-woven products, has reached 505, according to the local health department. 332 people have already been discharged from hospitals, while remaining 153 patients are undergoing treatment in different facilities of the city.

Authorities found that all patients have symptoms which include epilepsy, forgetfulness, anxiety, nausea, headache and back pain.

Given the pandemic situation, everyone who fell ill was tested for сoronavirus, and all the results came back negative.

What Could've Caused the Outbreak?

Besides water contamination, there's also a suspicion that anti-mosquito fogging may have caused the disease. Doctors from top medical institutions have conducted blood tests and CT (brain) scans along with Cerebral Spinal Fluid tests on patients, which have so far turned up normal, making the disease a mystery.

Other tests, conducted by experts from All India Institute of Medical Sciences (AIIMS), however, revealed the presence of lead and nickel metals in excessive quantities in patients.

Officials are now also exploring the possible overuse of pesticides on vegetables in the area.

Preliminary analysis of various test reports has established the role of organochlorine substances, which are used in agriculture and mosquito fogging.