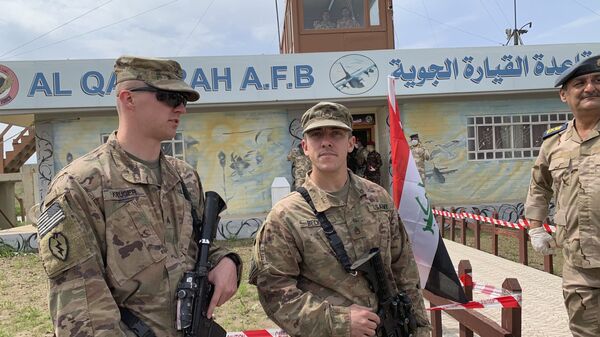 Asya Geydarova
Editor
All materialsWrite to the author
Concerns follow the recent plans announced by the Trump administration to limit its military personnel in Iraq and Afghanistan along with a possible departure of the aircraft carrier USS Nimitz now stationed in the Persian Gulf.

American troops pulling out from the Middle East may give an opportunity for Iran to carry out military strikes in the region, a military official familiar with the region told the Associated Press on Monday.

According to the official, with such a scenario given, the US military has decided that the USS Nimitz must remain in the Persian Gulf "for some time to come". Additionally, another fighter jet squadron may be deployed to the region, if needed.

In mid-November, Acting Defence Secretary Christopher Miller announced that by 15 January 2021, the US military presence in Iraq and Afghanistan will be reduced to 2,500 personnel in each country. Shortly after, National Security adviser Robert O'Brien expressed hopes that all American soldiers would return to the United States safe and sound by May.

An Axios report said last month that the Israeli Defence Forces were put on alert over fears of potential retaliation attacks against Israel either by Iran, or through "its proxies in Syria, Gaza and Lebanon". The speculations about potential military strikes have intensified following the assassination of Iranian nuclear physician Mohsen Fakhrizadeh, for which the Iranian officials put the responsibility on Israeli intelligence and threatened to retaliate.

Bringing American soldiers back home and putting an end to the "endless wars" around the world was one of the key promises Trump made during his 2016 election campaign and which he has gradually carried out during his tenure in the White House. In 2018, the US president announced a complete troops withdrawal from Syria, which, however, has dragged on before Washington said it would keep some of its contingent in the country in order to "secure oil fields".

So far, there are about 3,000 US troops in Iraq, and roughly 4,500 US forces in Afghanistan. According to a Defence Department report, the wars in Afghanistan, Iraq and Syria have cost US taxpayers more than $1.57 trillion since the 9/11 attacks.