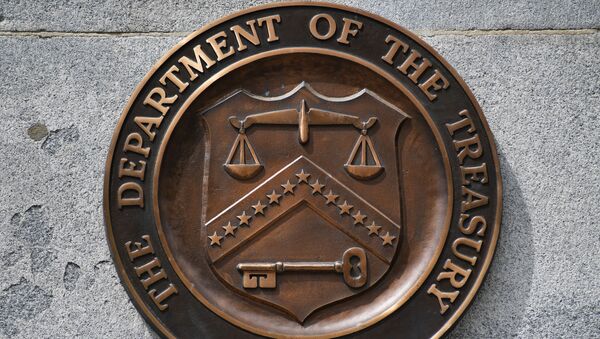 WASHINGTON (Sputnik) - The United States has imposed sanctions against the Iranian ambassador in Yemen and a university for aiding Iran’s Revolutionary Guard Corps elite Quds Force, the US Department of the Treasury said in a statement on Tuesday.

"Today, the US Department of the Treasury’s Office of Foreign Assets Control (OFAC) is designating Hasan Irlu, an official in Iran’s Islamic Revolutionary Guard Corps-Quds Force (IRGC-QF) and the Iranian regime’s envoy to the Houthi rebels in Yemen, for acting for or on behalf of the IRGC-QF," the statement said.

The Treasury Department has also sanctioned the Qom-based Al-Mustafa International University, which the US authorities allege is a recruitment facility for the Quds Force.

In addition, the Treasury Department designated Iranian-based Pakistani national Yusuf Ali Muraj, who is alleged to have contributed to the Quds Force’s recruitment and execution of operations across the Middle East and in the United States.

The United States had designated the IRCG-QF as a terrorist organisation.

US Secretary of State Mike Pompeo said in a statement that Irlu’s appointment signals reinforcement for Yemen's Shia rebel Houthi movement and will complicate peace negotiations in Yemen.

Today, the U.S. is designating Hasan Irlu, an Islamic Revolutionary Guard Corps– Qods Force officer, and an individual and a university supporting IRGC-QF recruitment operations. Iran’s support for the Houthis fuels the conflict in Yemen and exacerbates the country’s instability.

​Also, the United States has sanctioned six entities and four vessels related to the transport of North Korean coal, the Treasury Department said in a statement on Tuesday.

"The DPRK continues to circumvent the UN prohibition on the exportation of coal, a key revenue generator that helps fund its weapons of mass destruction programs," Treasury Secretary Steven Mnuchin said in the statement that referred to the Democratic People’s Republic of Korea. "The North Korean regime often uses forced labor from prison camps in its mining industries, including coal, exploiting its own people to advance its illicit weapons programs."

"All four vessels loaded coal directly from North Korean ports and transported their cargo throughout the region," the statement said. "For many of the vessels, this activity dates back several years."

US sanctions against North Korea’s coal itself goes back to 2017 when it began targeting individuals and entities responsible for financing and supporting Pyongyang’s nuclear weapons and ballistic missile programs.