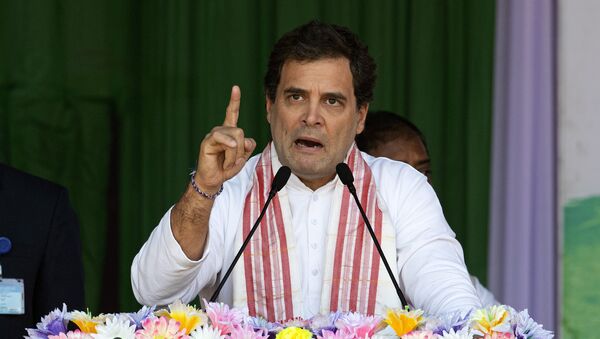 Ashutosh Kumar
Sputnik correspondent
All materialsWrite to the author
Farmers protesting against the Modi government’s Farmers Produce Trade and Commerce Bill, 2020 and the Farmers Agreement on Price Assurance and Farm Services Bill, 2020 are demanding both laws be repealed. The entire opposition led by the Indian National Congress is supporting the farmers.

The comment comes against the backdrop of the ongoing demonstrations against the farm reform laws brought in by the Modi government and the shutdown of the country today.

Taking to Twitter, Gandhi also urged the people to support the farmers' cause.

He also called for people to support the farmers' call for a nationwide peaceful shutdown today. The Bharat Bandh, or shutdown India, call has support from all political parties who are protesting in various parts of the country to show solidarity with the protesting farmers against new farm laws.

“People of the country know that the farmers have called for a day’s strike today. We must support and make the struggle of the peasants successful,” Gandhi added in the tweet.

​The Congress party and the agrarian state of Punjab where it rules - along with several northern Indian states - are utterly opposed to the agriculture reform bills brought by the Modi government as they feel that the principles of the free market economy in the agriculture sector will hurt the farmers.

The Laws and Farmers' Concern

The laws - the Farmers Produce Trade and Commerce and the Farmers Agreement on Price Assurance and Farm Services Law, 2020 - against which the farmers are protesting were approved by the Indian parliament in September.

The Farmers Produce Trade and Commerce Bill allows farmers to sell their produce at places apart from their designated government-run agriculture market. Protesting farm organisations fear that this law will kill the system of state procurement at a minimum support price (MSP) by the government.

The Farmers Agreement on Price Assurance and Farm Services Law, 2020 allows contract farming under which farmers can enter into supply agreements with private firms for remunerative and pre-decided prices.

Speaking to a news channel, State Chief of the BJP-ruled Madhya Pradesh said the Congress party is doing drama over the issue. He added “Farmers across the country are in favour of the new agriculture laws and are pleased that the Centre is open for discussion to consider their grievances. Farmers in Madhya Pradesh are satisfied as they see no reason to oppose the new laws.”