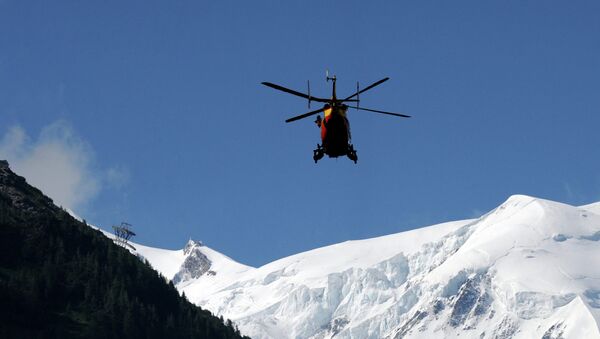 Evan Craighead
All materialsWrite to the author
The Service Aérien Francais chopper pilot reportedly sounded an emergency alarm and was able to eject from the aircraft before it crashed at an altitude of 1,800 meters in the Bonvillard sector of France's Savoie.

Forty search-and-rescue personnel and three helicopters were deployed to the prefecture of the Savoie department Tuesday evening after a chopper transporting four Service Aérien Francais employees and two first-aid workers crashed in the French Alps.

Responding authorities scanned the area for the Service Aérien Francais pilot, who ejected from the helicopter around 7:10 p.m. local time, and the other five occupants of the craft.

"A doctor and a rescue team arrived at the zone at [8:20 p.m. local time]. Contact was established with one of the vehicle's occupants," the prefectural government's statement read, as reported by EuroNews.

It was later confirmed that the pilot was the only passenger to survive.

"To save lives, they take all the risks. This evening in Savoie, 3 members of the French Air Rescue and 2 CRS Alpes succumbed to a helicopter crash," French President Emmanuel Macron tweeted late Tuesday night.

"A wounded person fights for a living. Support from the Nation to the families, friends and colleagues of these French heroes," he concluded.