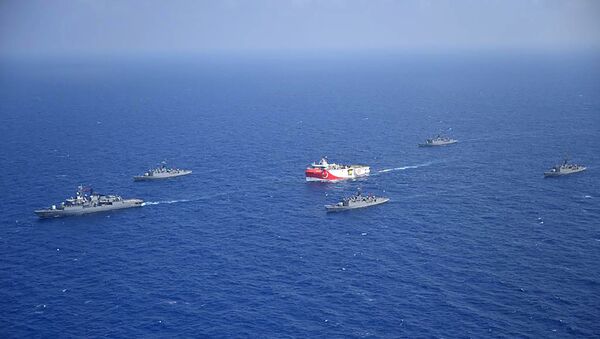 © AFP 2023 / -
Subscribe
International
India
Africa
Sofia Chegodaeva
All materialsWrite to the author
Relations between Turkey and the EU have been strained in recent months amid a row over drilling in the eastern Mediterranean, with Greece and Cyprus opposing Turkish operations in the disputed waters.

The minister added that "problems with the EU can only be solved if they act with common sense at the EU summit and later". Cavusoglu went on to say that Ankara expects the EU to act as an objective mediator in the dispute.

This comes after EU foreign ministers said on Monday that Turkey had failed to help resolve a dispute with Greece and Cyprus over drilling for natural gas resources in the eastern Mediterranean. They added, however, that any decision on retaliatory sanctions will be made at an EU summit on 10-11 December.

On the same day, Daily Sabah published a video message from Turkish President Recep Tayyip Erdogan, emphasising that Ankara will not tolerate any attempts made by other countries in order to confine Turkey "to the Antalya bay in Eastern Mediterranean". He also said that if Greece wants a lasting solution to the eastern Mediterranean issue, it should rely on diplomacy. 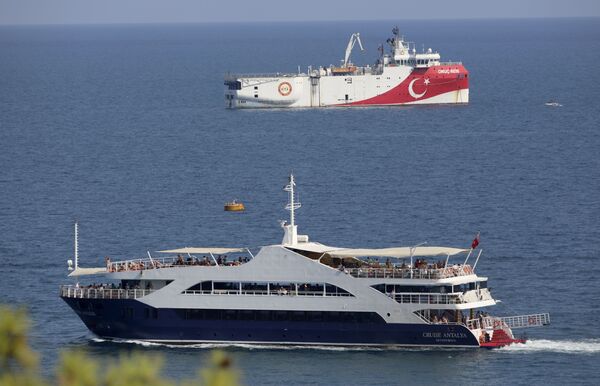 Turkey's research vessel, Oruc Reis, rear, anchored off the coast of Antalya on the Mediterranean, Turkey, Sunday, Sept. 13, 2020. Greece's Prime Minister Kyriakos Mitsotakis welcomed the return of a Turkish survey vessel to port Sunday from a disputed area of the eastern Mediterranean that has been at the heart of a summer stand-off between Greece and Turkey over energy rights.
© AP Photo / Burhan Ozbilici

In the past few months, Turkey has sent several drilling vessels to explore for energy resources in the disputed waters of the eastern Mediterranean, thus provoking tension in relations with Greece and Cyprus who claim these waters form part of their exclusive economic zones. Turkey says that claims made by Greece and Cyprus violate its sovereign rights. Cavusoglu also said he did not expect any sanctions from the EU over the dispute, adding that the bloc itself lacked a common approach to the conflict.