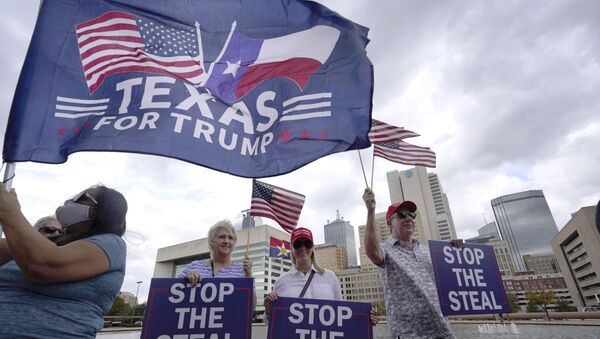 “The battleground states flooded their people with unlawful ballot applications and ballots while ignoring statutory requirements as to how they were received, evaluated and counted,” a statement put out by his office Tuesday said.

Accusing officials in Georgia, Michigan, Pennsylvania and Wisconsin of “destroying” Americans’ trust in the electoral process and “compromise[ing] the security and integrity of the 2020 election,” Paxton alleged that these states violated statues approved by their own legislatures, and in so doing, were unconstitutional.

“Their failure to abide by the rule of law casts a dark shadow of doubt over the outcome of the entire election. We now ask that the Supreme Court step in to correct this egregious error,” the attorney general alleged.

The state of Texas has sued Georgia, Michigan, Pennsylvania & Wisconsin over election irregularities!

The Texas attorney general’s move comes in the wake of multiple failures by the Trump campaign to get state courts in the contested states to hear their cases.

In an interview with Fox News late last month, President Trump alleged that his team was not being allowed to “put in our proof” in state courts, and said he would prefer for his lawyers to file “one nice, big, beautiful lawsuit with tremendous proof” based on “hundreds and hundreds of affidavits.”

GOP Texas Governor Offers $1M Bounty For Proof to Support Trump's ‘Efforts to Identify Voter Fraud’
On Monday, Texas Senator Ted Cruz announced that he would be happy to present oral arguments before the Supreme Court on a Trump campaign election fraud-related case on Pennsylvania on the constitutionality of no-excuse mail-in voting.

Trump has spent much of the last month accusing Democratic rivals of large-scale voter fraud in Democrat-governed precincts in battleground states, blaming mass dumps of mail-in votes in the early morning hours of the day after the election for turning his early lead into a loss.

The president’s complaining about mail-in votes goes back to the summer of 2020 and the introduction of mass early mail-in voting, ostensibly over health concerns related to the coronavirus pandemic. Dismissing the mass mail-in voting system as a “disaster” that was “out of control,” Trump warned in September that there may not be any “transfer of power” to his Democratic rival if he was cheated out of the election. Democratic lawmakers accused Trump of using the mail-in vote issue as an excuse to try to stay in power if he lost.