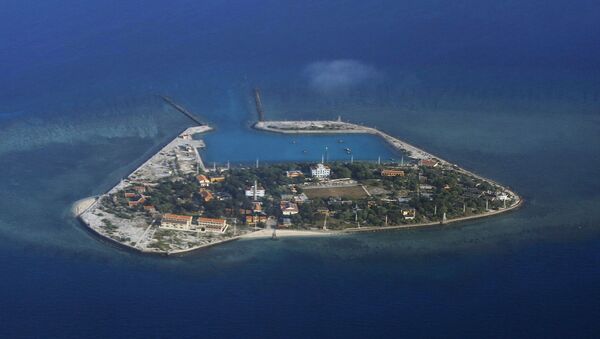 Morgan Artyukhina
All materialsWrite to the author
A Beijing-based think tank has called attention to extensive land reclamation efforts and military upgrades on a set of islands in the South China Sea controlled by Vietnam. While China is often faulted by the US and its allies for similar efforts aimed at solidifying its claims over the area, Hanoi or Taiwan aren’t given the same attention.

Vietnam’s land reclamation on several South China Sea islands has continued in recent years, and reclaimed land is being fitted out with new military installations, too, the South China Sea Probing Initiative (SCSPI), a think tank connected to Peking University, has revealed.

A set of recent tweets by SCSPI has brought attention to recent changes on Sand Cay and Storm (Spratly) Island, two islands occupied by Vietnam in the Spratly Islands archipelago.

The satellite images show both islands are still being expanded and built upon, with a helipad and wharf appearing on Sand Cay in the last few months and continued harbor dredging, a large 3D radar station and a missile launch site being built on Storm Island.

​Since 2011, Vietnam has doubled the size of both islands, adding 9 acres to Sand Cay and 40 acres to Storm Island. In all, Hanoi occupies 27 “features” in the Spratly Islands, 10 of which are islets; the rest are platforms mounted on submerged rocks and reefs, according to the Center for Strategic and International Studies (CSIS), a Washington, DC think tank.

The islands are two of the largest in the Spratly Island chain, a set of tiny islands that span the central South China Sea. Several nations have laid claim to all or part of the Spratlys, due to the valuable fishing waters surrounding them and the high possibility of petroleum deposits under the seafloor, including Vietnam, the Philippines, Brunei, Malaysia, the People’s Republic of China and the Republic of China, better known as Taiwan.

Trung Nguyen, international relations dean at Ho Chi Minh University of Social Sciences and Humanities, told US state-owned Voice of America in 2019 that Hanoi has deliberately kept its actions quieter and smaller in scope.

“The Vietnamese government has made it very clear they just reclaim the islands for self-defense, and they do not expand massively for other purposes,” Nguyen said. “I don’t think the Vietnamese government wants to draw a lot of attention from other countries on their reclamation, so that’s the reason they want to do it quietly.”

China, too, has moved to solidify its claims in the region, building up nearby islands such as Fiery Cross Reef, 90 miles northeast of Spratly Island, and several others across the South China Sea with reclaimed land and military installations. Taiwan’s claimed Taiping Island, 115 miles northeast of China’s Fiery Cross Reef and just 7 miles west of Vietnam’s Sand Cay, is the largest in the Spratly chain and has been similarly fortified. Last week, Hanoi protested after Taiwanese forces conducted live-fired drills near Taiping Island, which they call Ba Binh Island. 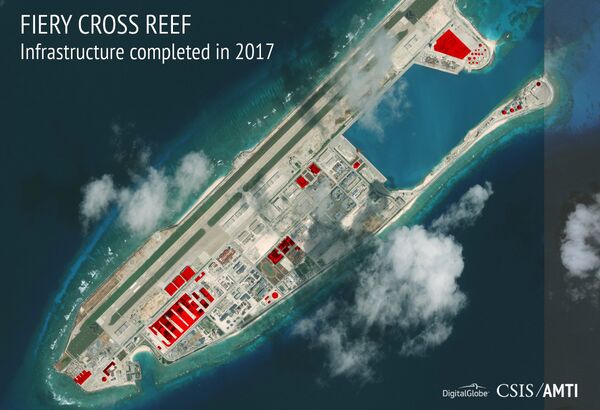 However, Washington has almost totally ignored the parallel actions of Taiwan and Vietnam, focusing its criticisms on China. While the US has not yet articulated a position on the competing land claims, it has explicitly rejected most of China’s sea claims, and the US Navy in particular goes out of its way to show contempt for China’s artificial islands with its freedom of navigation operations (FONOPs).

During such drills, a US warship sails through the territorial waters claimed by China around the island as if the island were not there and no such claims existed. China often musters ships or aircraft to ward off the encroaching warship, which has led to some tense situations. 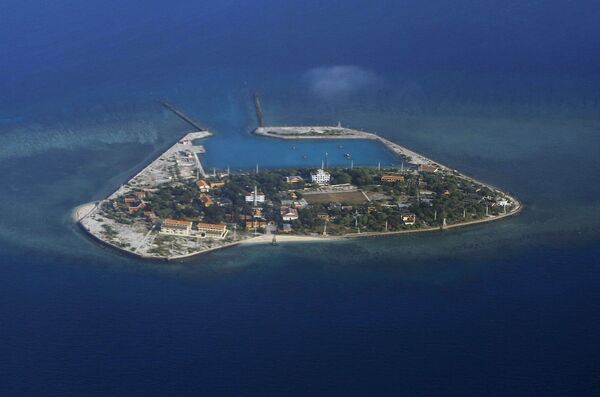 The islands, it must also be said, are more than 2,000 miles away from the closest US territory, which is Guam, and nearly 6,000 miles from Hawaii, the closest US state. In other words, the US has made no claims on territory or waterways in the South China Sea and has nothing at stake in the outcome of the dispute, just an interest in the strategic gains it would make from the victory of its regional partners, as US Secretary of State Mike Pompeo has stated.

The US bases its attitude on the United Nations Convention on the Law of the Sea (UNCLOS), in particular a 2016 ruling by an Arbitral Tribunal that dismissed China’s and Taiwan’s land claims in favor of those of the Philippines, finding that many of the reclaimed islands are legally “rocks.” Beijing rejected the ruling, but so did Taipei, and such a description no doubt fits Vietnam’s reclaimed islands as well. 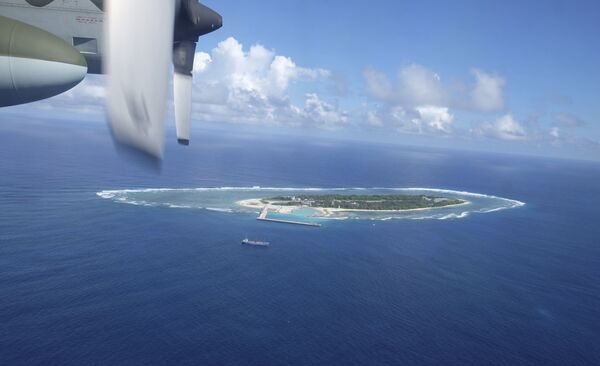 An aerial view shows a vessel preparing for a search-and-rescue exercise off Taiping island, in the South China Sea , Tuesday, Nov. 29, 2016, as part of efforts to cement its claim to a key island in the strategically vital waterbody. Eight vessels and three aircraft took part in Tuesday's drill, which simulated a fire aboard a cargo ship that forced crew members to seek safety on Taiping in the Spratly island group.
© AP Photo / Johnson Lai

Despite this, Washington carries out no FONOPs flouting Hanoi’s claims, and Vietnam’s and Taiwan’s fortifications, if mentioned at all in the Western press, are portrayed as necessarily defensive against Chinese encroachments, even though the issue of competing claims has not been settled and, from the point of view of each nation involved, the others are the aggressive violators.

In August, Washington took direct aim at China’s artificial islands, with the US Commerce Department blacklisting two dozen Chinese firms it accused of being part of the “militarization of disputed outposts in the South China Sea to undermine the sovereign rights of US partners in the region.” The US State Department began sanctioning individuals connected to the reclamation projects at the same time.

Despite this framing of a Chinese bully, Beijing has repeatedly turned to the Association of Southeast Asian Nations (ASEAN), of which Vietnam, the Philippines, Malaysia and Brunei are all members, as the vehicle by which land and sea claims between them must be settled.

In July, China committed to reopening negotiations on a Code of Conduct of Parties in the South China Sea, which would create a legal structure in which issues such as fishing, mining, and military drills could be settled.

At the annual ASEAN summit in Hanoi last month, Vietnamese Prime Minister Nguyen Xuan Phuc said the member states look forward to the early conclusion of the code of conduct which is effective, substantive and consistent with international law, particularly the 1982 UNCLOS.”

Philippine President Rodrigo Duterte likewise committed to fast-tracking a code of conduct, saying he is “one with ASEAN in transforming the South China Sea into a sea of peace and prosperity for all. We are committed to the immediate conclusion of a substantive and effective Code of Conduct in the South China Sea. And if I may add, it has been a long time and it is a long wait.”

Fear of such a peaceful resolution, which would preclude the military response Washington has long been posturing for, has motivated US policy-influencing think tanks like the Council on Foreign Relations to suggest that the US head Beijing off and establish its own code of conduct with the ASEAN nations it could then impose on China.