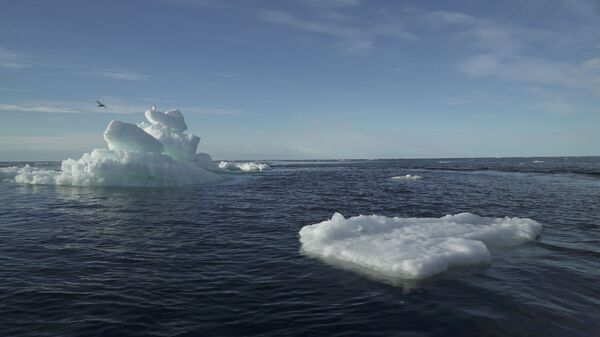 Gaby Arancibia
All materialsWrite to the author
The 2020 Arctic Report Card is the 15th installment of the environmental report led by the US National Oceanic and Atmospheric Administration. The document is released every year in an effort to inform decisions by local, state and federal officials.

Published Tuesday, the latest installment of the annual report has revealed that the Arctic region has only continued to drastically change as a result of warming temperatures that melt ice and snow cover in addition to fueling extreme wildfires.

The report, which involved the participation of 133 scientists from 15 countries, found that “the transformation of the Arctic to a warmer, less frozen and biologically changed region is well underway.”

Officials explained that the root cause for the Arctic’s transformation was the change in the region’s air temperature and sea ice, as the region documented its second-warmest year since at least 1900 and recorded increasingly fragile sea ice.

Scientists noted in their findings that the temperature over the region this year was about 1.9 degrees Celsius above the baseline average for 1981-2010 figures, and that the warmth was driven by “anomalously warm conditions” recorded during the first seven months of 2020 across the Eurasian Arctic.

The report also underscores that conditions in the Arctic regions “are becoming more favorable for fire growth, with more intense burning, more fire growth episodes, and greater consumption of fuels.”

During the month of June, scientists were shocked when the temperature in Verkhoyansk, a city in northern Russia that sits 260 miles from the Arctic coast, managed to reach an unprecedented 38 degrees Celsius. The city is also located in Russia’s Sakha Republic, which endured devastating wildfires in 2020.

A combination of the region’s heatwave at the time and the peat soil found in the area drove many of the wildfires that ravished the Siberian region earlier this year. NASA in July released satellite data that showed heavy smoke plumes covering much of the area and indicated that the wildfires expelled more carbon dioxide in June and July 2020 “than in any complete fire season since 2003.”

Russia’s wildfires weren’t fully extinguished by the country’s Aerial Forest Protection Service until late September, by which time the blazes had spread across some 6.7 million acres of land.

The report also noted that ocean surface temperatures had warmed by roughly 1 degree to 3 degrees Celsius in August over the 1982-2010 average, adding that the change contributed to record-low sea ice in the Kara and Laptev Seas.

Commenting on the report, Mark Serreze, the director of the US National Snow and Ice Data Center, told the Washington Post that the year-on-year changes to the Arctic are largely due to humans.

“The Arctic is quickly losing its ice, and as it loses its ice, it loses its soul. In terms of a report card, the Arctic has been failing for a long time, and the blame lies on us,” Serreze said, adding that the altered region began on this path in 2007, when scientists found that sea ice had reached a record low.

The age of sea ice in the Arctic at winter maximum in 2000 (left, week of March 18) and 2020 (right, week of March 21). Age is a stand-in for ice thickness and durability; young ice is thinner and more likely to melt in the summer. NOAA Climate.gov map, based on data from the National Snow and Ice Data Center.
© Courtesy of the US National Oceanic and Atmospheric Administration

A graphic included in the newly released report shows that over a 20-year period, the age of the majority of the sea ice dwindled to less than two years. “Ice older than 5 years is very rare today; only a small ribbon remains along the islands of the Canadian Arctic,” reads the report.

The latest assessment comes as researchers recently revealed that Greenland’s largest glaciers are likely to lose a sizable amount of ice due to greenhouse gas emissions such as carbon dioxide. The Arctic Report Card touched on Greenland’s ice sheets; however, the report indicated the country’s ice sheet decline was “substantially lower than the record” losses documented during surveys conducted between 2018 and 2019.