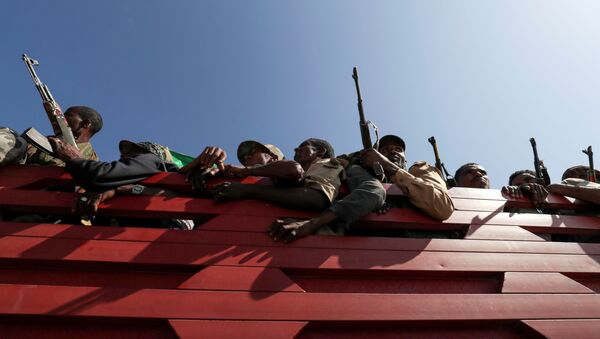 Ilya Tsukanov
All materialsWrite to the author
Ethiopian federal troops announced that they had regained full control over the Tigray capital of Mekelle on November 28. Addis Ababa launched a military operation in the region on 4 November, accusing local authorities of attacking a local military base.

Reuters' sources did not provide the news agency with any further details regarding the incident, saying that the circumstances were not yet entirely clear. Ethiopian government officials and the Tigray People's Liberation Front (TPLF) regional authorities-turned-rebel group have yet to comment.

Earlier Monday, Ethiopian Prime Minister Abiy Ahmed accused the TPLF of hindering aid deliveries and the provision of medical assistance, and indicated that the government's priority was to restore "law and order" in the restive region and to bring "fugitives to justice".

The UN announced last week that it had struck a deal with the Ethiopian government for "unimpeded, sustained and secure access" for humanitarian deliveries to Tigray.

Abiy, winner of the 2019 Nobel Peace Prize, announced a military operation in Tigray on 4 November, several months after the breakdown of relations with the local TPLF authorities after they disobeyed a federal order to postpone elections on the pretext of coronavirus-related health concerns. The region held elections anyway, but their results were never recognized by Addis Ababa. Several days before the military operation began, regional authorities voiced fears that Addis Ababa may mount an offensive as "punishment" for Mekelle's decision to hold the vote.The TPLF dropped out of Abiy's governing coalition in late 2019.

Federal forces launched their operation after accusing local militias of attacking a local garrison and attempting to steal military equipment. Federal troops entered the Tigray capital of Mekelle last week, although fighting has continued since, with local sources reporting a lack of food supplies, fuel, electricity, internet access and medicines.

The UN estimates that some two million civilians are in need of assistance in and around Tigray, with an estimated one million people thought to have been displaced in the fighting, with some fleeing to neighbouring countries.