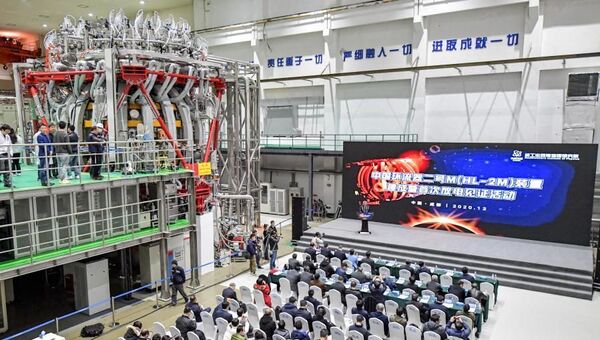 Morgan Artyukhina
All materialsWrite to the author
Just a week after turning on its first domestically designed fission nuclear reactor, China has made another major leap by powering up an experimental fusion reactor, which has the potential to provide gigantic amounts of electricity without radioactive waste.

On Friday, the HL-2M Tokamak reactor was turned on for the first time in Sichuan’s capital of Chengdu, the China National Nuclear Corporation (CNNC) announced.

According to Xinhua News Agency, the experimental reactor generates plasma hotter than 150 million degrees Celsius by recreating the force that makes stars shine - nuclear fusion - which is why the reactor has been nicknamed China’s “artificial sun.”

In a fusion reaction, two hydrogen atoms combine to become a single helium atom, releasing colossal amounts of energy in the process - many times more energy than the inverse fission reaction, which powers conventional nuclear power plants by splitting big atoms such as uranium and plutonium. 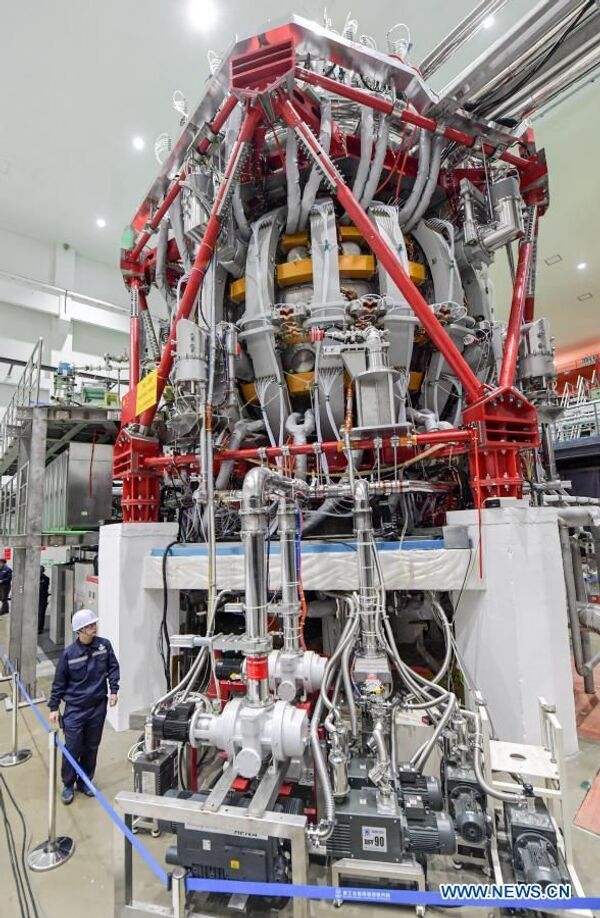 According to the International Atomic Energy Agency (IAEA), hydrogen fusion does produce an unstable radioactive isotope of hydrogen called tritium, which emits a beta particle capable of being repelled by human skin and which quickly dissipates, with the tritium being returned to the reactor’s fuel supply as normal hydrogen. However, the longer-term effects of the reactor’s structural material to high-energy neutrons is a problem not yet solved.

“It is fine for short-term operation,” Wang Yugang, a professor of nuclear physics at Peking University, told the South China Morning Post about the HL-2M’s design, adding that “[i]t will take a long time to find” the right material for decades of fusion reactor use.

The downside is that a fusion reaction is hard to keep going - really hard. In our sun, the weight of 332,000 Earths’ worth of gas pushing down into the center of the star provides the pressure required to generate fusion, but in Chengdu, they have to generate a huge magnetic field to create the necessary conditions.

The tokamak reactor design was created by Soviet physicists in the late 1950s and uses a torus shape to create a stable plasma equilibrium. 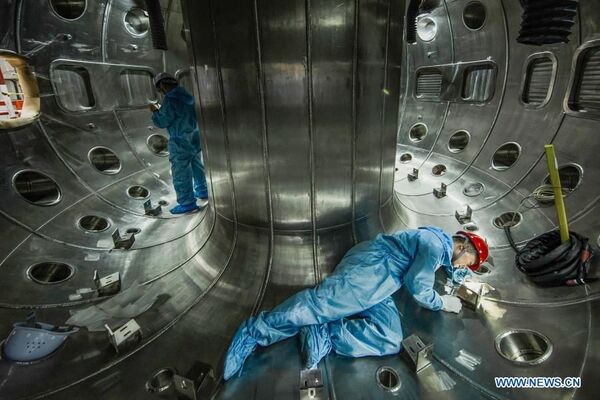 The Communist Party official newspaper People’s Daily noted on Twitter that fusion energy is key not only to China’s strategic energy needs, but also to enabling environmentally sustainable development.

According to AFP, Chinese scientists intend to use the HL-2M reactor to collaborate with other scientists from 34 other countries who are also working on developing fusion power. In July, they began construction of the International Thermonuclear Experimental Reactor, another tokamak-style fusion reactor expected to be completed by 2025. In a statement at the time, the scientists noted that “a pineapple-sized amount of this fuel [seawater] is the equivalent of 10,000 tons of coal.”

The debut of the HL-2M reactor comes just a week after another nuclear power first for China: the powering up of its first domestically designed nuclear reactor. On November 27, the No. 5 unit at the Fuqing Nuclear Power Plant, a conventional fission reactor named Hualong One, was connected to the Chinese power grid, Sputnik reported.

“This marks China breaking the monopoly of foreign nuclear power technology and officially entering the technology’s first batch of advanced countries,” CNNC said at the time. With a half-dozen more reactors of the same type under construction, Hualong One will help China to meet its climate change-mitigation goal of becoming carbon-neutral by 2060.