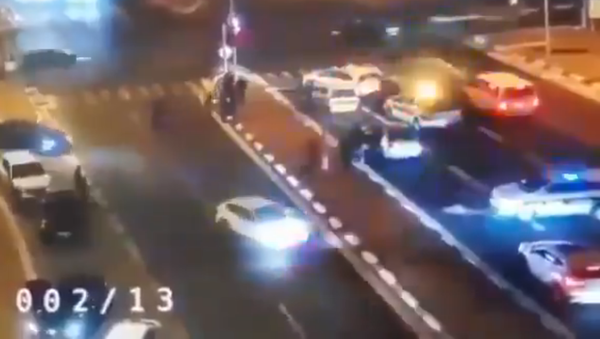 Daria Bedenko
All materialsWrite to the author
Over the weekend, a video of what was described in social media as the "killing of a senior Mossad official" named in some media reports as Fahmi Hinavi went viral, with people fueling conspiracies that the alleged incident might be Iranian retaliation for the recent killing of one of its prominent nuclear scientists.

According to an unconfirmed story which circulated online over the weekend, a man who was alleged to be a "senior Mossad officer" - identified in Iranian media as Fahmi Hinavi and multiple social media reports in Turkish, Persian, Arabic and other languages containing the same information and the name (which, however, was spelled as "Fahmi Hinawi") - was claimed to have been assassinated when his car stopped at a red light in southeast Tel Aviv on Thursday, with attackers alleged to have immediately fled the scene.

Following the birth of the controversial story, a video alleged by twitterati to show the moment of the "Mossad official killing" - some described the incident as the "killing of Mossad commander" - went viral, triggering speculation and conspiracies among netizens, with some fantasising that the alleged incident could be an Iranian response to the killing of its senior physicist, Mohsen Fakhrizadeh, on 27 November.

At first it looked like any other viral story that twitterians share, until, eventually, some netizens took to social media to refute the reports as fake and rumour.

Fahmi Hinawi is alive, the story and rumor about the death of the “Mossad agent” as a result of an assassination attempt, as it turned out, was originally spread by a journalist of the Iranian news agency Tasnim, after that the “sensation” was picked up by the Lebanese media.

Reports claiming assassination of an Israeli Mossad Commander name Fahmi Hinawi in Tel Aviv is fake. Mossad does not have an agent known as Fahmi Hinawi. It is said that the events in the region are not caused by Assassination, but by conflicts between two Mafias.

Netizens, engaging in heated debate, said that Israeli media either did not report the story or claimed "Hinavi" to be an ordinary citizen.

Sputnik dug into the story, attempting to learn more and bring those findings to our readers.

It appeared that there were reports rolled out by Israeli media, describing the location and time of a shooting, that coincide with those mentioned in the reported "Mossad official killing" story. Particularly, the Friday report by Israel Hayom and Thursday report by Walla said that a 45-year-old Lod resident was found shot dead near Moshav Ginaton, a district in southeast Tel Aviv. His vehicle was reportedly left at a traffic light.

The photos and video provided by Israel Hayom and Walla, respectively, appeared to show the car and a background identical to those in the viral video dubbed by netizens as showing the killing of a "Mossad commander".

The photo posted by social media users over the weekend alleged to be from the scene and showed a car door with multiple bullet holes appearead to show a different vehicle when compared with the photo provided by Israel Hayom. 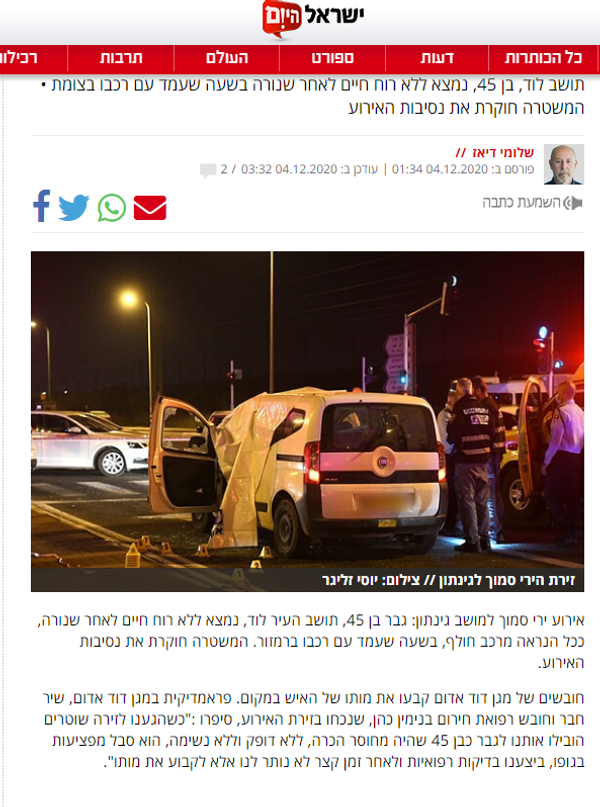 Screenshot from the website of Israel Hayom, with the picture described as "The shooting scene near Ginaton"
© Photo : Israel Hayom

Earlier, Sputnik reported that the video of the alleged killing of a "Mossad commander" went viral, triggering speculation on the alleged "Iranian retaliation" for the death of its nuclear scientist, Mohsen Fakhrizadeh, who was killed in a Tehran suburb last week, with the Islamic republic dubbing the incident a "terror attack" and blaming Israel and the United States for Fakhrizadeh's murder.

There was no official comment from Tel Aviv following the reports.