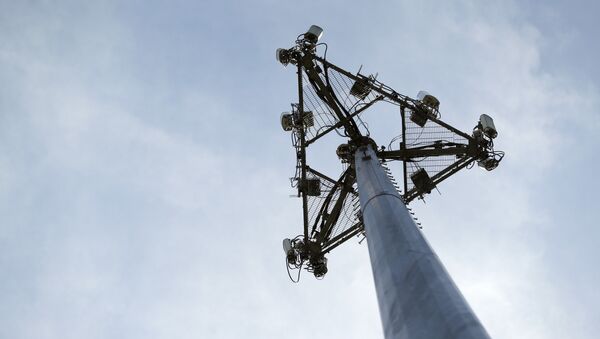 © AP Photo / Jeff Roberson
Subscribe
Ilya Tsukanov
All materialsWrite to the author
The next-generation high-speed internet technology, currently in the middle of a rollout in many parts of the world, has already faced attacks on its infrastructure in countries ranging from the UK to New Zealand. Conspiracy-minded critics of 5G have made unsubstantiated claims that the tech is related to the spread of the coronavirus.

The Canadian Security Intelligence Service (CSIS) is concerned about the spread of conspiracy theories linking 5G to the coronavirus, and fears the next step may be physical attacks on 5G sites by radicalised individuals.

“As companies begin 5G infrastructure construction in earnest, extremists from across the ideologically motivated violent extremist landscape could engage in acts of arson and vandalism against that infrastructure,” the intelligence agency was said to have indicated in a confidential report seen by Canada’s Global News.

The TV channel, which says it has received access to the report in a trove of other documents on the national security implications of the coronavirus pandemic, says CSIS has been monitoring the information space for the government and Canada's international partners, with special focus paid to coronavirus disinformation spread by actors ranging from extremist groups to foreign powers.

One popular conspiracy theory is said to be that Covid infection is caused by radiation poisoning from 5G sites. Another apparently suggests that governments are building 5G infrastructure under the cover of Covid lockdowns. A third says 5G is part of a wider plot aimed at depopulating the world and establishing a worldwide dictatorship.

CSIS blames a range of actors for creating and spreading Covid/5G-related conspiracy, saying that everyone from white supremacists and anarchists to “online anti-capitalist, anti-technology, and environmental groups/communities” are involved.

A second CSIS assessment dated 1 May states that a “not insignificant minority of Canadians” believes there may be a connection between Covid and 5G, even though “physical opposition to 5G infrastructure” was said to have been “significantly less” severe compared with the UK and other European nations.

Canada has not been immune from attacks on infrastructure, the report specifies, with a cellphone tower in Laval, Quebec sustaining $1 million worth of damage in April, and six others set on fire outside Montreal in May. None were said to be associated with 5G.

Global News’ reporting about the confidential CSIS document follows the publication of a separate report by the Canadian intelligence service accusing Russia, China and Iran of ‘spreading coronavirus-related disinformation’ in a bid to ‘blame the West’ for the virus, sow discord among allies, or shift blame onto foreign actors. Publicly released excerpts from that report did not provide any concrete examples of this alleged foreign disinformation effort.

Facebook to Remove 'Misinformation' and 'Conspiracy Theories' on COVID-19 Vaccines
In recent months, governments and tech giants have cracked down on a range of coronavirus conspiracy theories, with those casting doubt on the need for national lockdown measures or expressing concerns about vaccination campaigns and the people behind them subject to deplatforming, demonetisation or deletion on platforms including Facebook, YouTube, and Twitter.

Canada is one of dozens of countries where 5G has been launched, partially deployed, or invested in. The ‘internet of things’ technology promises data-transfer speeds which are between 50 and 100 times faster than 4G, and is expected to power everything from autonomous vehicles and smart homes to toasters, toilets and hairbrushes connected to the internet, as well as things such as security systems.

Canada became embroiled in a diplomatic spat with China after detaining Huawei's chief financial officer Meng Wanzhou at Vancouver’s airport in late 2018, with the businesswoman threatened with extradition to the United States, where she faces charges related to the theft of trade secrets. China, Meng and Huawei have vigorously denied the allegations, and accused Ottawa of acting as an “American lapdog".