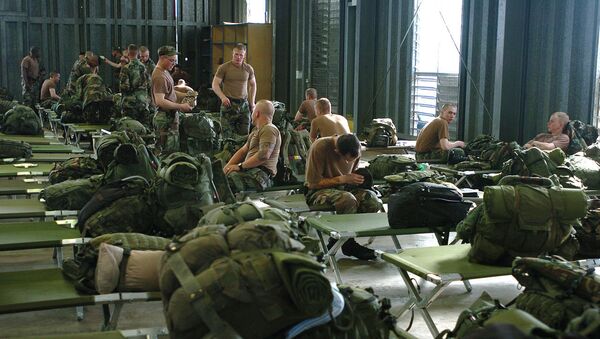 Maxim Minaev
All materialsWrite to the author
The Australian Defence Force said that they were unaware of such an order and will be investigating the matter.

Junior troops in Edinburgh, South Australia were forced to track and record details of the toilet habits of their compatriots, according to The Daily Telegraph.

Soldiers were allegedly ordered to inspect the toilet and record details in what has been described as a "P*** and Poop Tracker" programme.

In turn, infuriated soldiers protested, calling the duty a “blatant attempt to strip the men and women of their ­dignity and belittle them”, according to reports.

The data was reportedly supposed to be added to a classified 22-page Department of Defence 'Poo/Wee' Operator's Log.

As a sign of protest, troops, charged with "spying", started to log fake entries, with such comments as "Trooper urinated. Seemed nervous, hid from view" or "Good stream, missed the bowl", Daily Mail claims.

After the incidents occurred, a Commanding Officer ordered the destruction of the log book and moreover, according to reports, the journal was then taken out from the base in an effort to verify what troops appealed was only a culture of harassment.

“This log book exercise was designed to turn Diggers against each other,” Veteran representative John Simmons, from the Jesse Bird Welfare Centre said as quoted by The Mail Online. "When you have systemic problems of core mental health and then you're doing this to Diggers... it's a sure-fire way to cause a lot of issues".

Responding to the incident, an Australian Defence Force spokeswoman said that they were unaware of the log book and “will be investigating the matter”.

The allegations come weeks after reports about several Australian servicemen committing suicide last month amid a scandal caused by the recent claims on extrajudicial killings by Australia's elite troops in Afghanistan.

The Australian Defence Force had presented the report by Australian Supreme Court Justice Paul Brereton, which recommended an investigation of 19 soldiers for the deaths of 39 civilians between 2005 and 2016. According to the report, the killings were a part of the initiation ritual in the elite Special Operations Task Group.