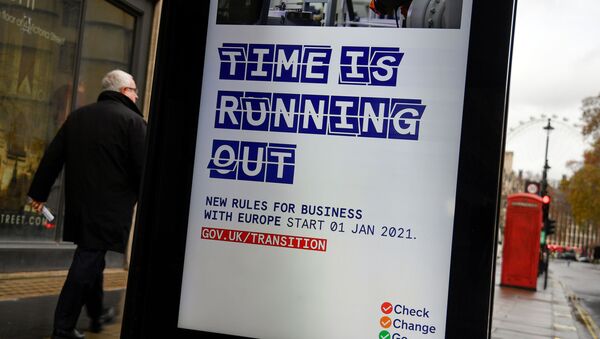 Kirill Kurevlev
Correspondent
All materialsWrite to the author
A majority of British citizens voted to leave the European Union in a 2016 national referendum that was quickly coined 'Brexit'. After reaching the Brexit deal and the formal UK departure from the bloc, the sides started exhausting negotiations on a trade deal, setting mutually beneficial relations to smooth the separation damage.

United Kingdom cabinet ministers reportedly stated that they will back Prime Minister Boris Johnson over a possible no-deal Brexit, The Times reported Sunday.

According to a report, thirteen cabinet ministers, including eight who opposed Brexit, said they would support the absence of a deal if the prime minister considers it necessary.

In a Saturday phone call with EU President Ursula von der Leyen, Johnson again underlined the importance of the UK having the "freedom" to make its own rules. As both leaders agreed to a "final throw of the dice" in an attempt to make the long-awaited deal, they admitted that the latest round talks had reached a stalemate because of three issues: quotas on fishing, state aid, and future dispute resolution - making the current state of the agreement not "feasible".

According to 10 Downing Street sources, cited by media, the UK chances of getting a sensible trade deal stand at an estimated 50 percent, with less than a month left before the transition period ends on December 31. 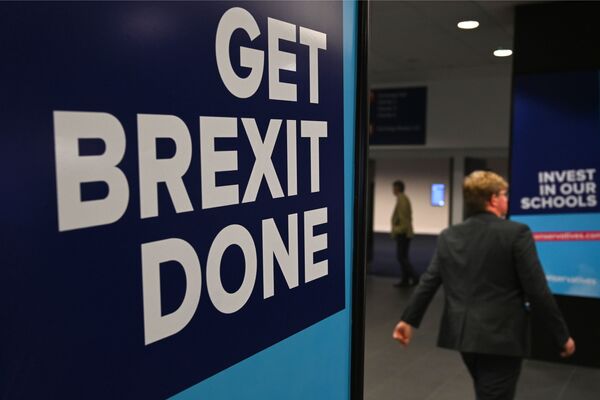 Conservative Party branding encouraging them to "Get Brexit Done" and "Invest in our Schools" is seen at the Manchester Central convention complex in Manchester, north-west England on September 29, 2019, on the first day of the annual Conservative Party conference. - Embattled British Prime Minister Boris Johnson gathered his Conservative party Sunday for what could be its final conference before an election, promising to "get Brexit done".
© AFP 2022 / PAUL ELLIS

On Friday, the UK and the bloc's negotiators, David Frost and Michel Barnier, respectively, announced that they had put the negotiations on hold for their political leaders to step up, both admitting the terms of the trade deal have not yet been met.

One of the cornerstones of the halt is fishing rights in UK and EU waters. Reports claim that Johnson has agreed to defer repatriating up to half of the fishing quotas for several years, while French President Emmanuel Macron reportedly insists on a 10-year transition period before any reduction of the EU fishing access.

The United Kingdom formally left the EU on January 31. Since that time the sides have still been unable to strike a deal mostly because of the three key issues. According to von der Leyen, the talks could resume on Sunday, as they are crucial in showing if any deal can be made between the two parties, before the UK permanently leaves the single market and the customs union with EU.

'Superiority of EU Law Is Non-negotiable'

Commenting on the Johnson-von der Leyen phone talks, Christian Schweiger, visiting professor at the Chair for Comparative European Governance Systems in the Institute for Political Science at Chemnitz University of Technology in Germany, opines that the UK prime minister and the European Commission president "have agreed to agree to disagree for now".

Schweiger suggests that Johnson and von der Leyen, during the Sunday talks, will discuss "the remaining or the fundamental issues that have to be resolved or remain unresolved".

"It's about mainly how the fisheries issue is going to be sorted after the Brexit, which we already had, obviously. And they're looking towards an agreement on this competition; law is another issue and dispute resolution," Schweiger says.

The third question, dispute resolution, according to the expert "refers to the resistance of Johnson and his government to accept the European Court of Justice as the final arbitrator in the potential trade disputes between the UK and the EU 27".

"And we all know this is about saying - now that we've exited the European Union, we cannot accept any sort of supreme jurisdiction from outside the UK ruling on anything that affects crucial issues such as the UK economy," he added.

Schweiger estimates that "von der Leyen will remain very firm" on the trade dispute resolution issue, as the EU has no partner that would not have accepted "the jurisdiction of the European Court of Justice in case of a trade dispute".

"The British are exceptional here and I think as long as they do not give up this point, there won't be any major agreement on competition law and fisheries.", Schweiger noted.

Weighing in on the possible von der Leyen position in the Sunday talks with Johnson, Schweiger opines that the European Commission president "cannot afford to give away too much", pointing out that "principles like the superiority of EU law, also in trade relations with other partners from outside the European Union, are something which is generally non-negotiable".

"I would be very surprised if she can offer a compromise to Johnson here, obviously, on the details of the trade relationship, on the details regarding the fisheries policies and the quotas particularly. There is room for compromise as long as the UK accepts in the future disputes there is superior EU law."

Overall, Schweiger believes that the Sunday round could either be "a breakdown", or "we will come to...some basic agreement which will then...pave the way towards a potential post Brexit deal regarding the status quo between the European Union and the United Kingdom".