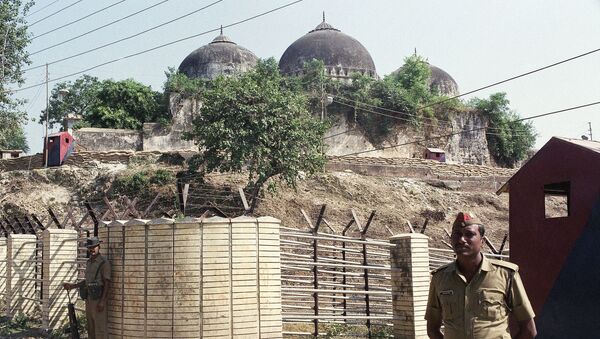 Many supporters of the Bharatiya Janata Party (BJP) observe 6 December as Shaurya Divas (Bravery Day).  A sixteenth century mosque was burned to the ground on this day in 1992 by an irate Hindutva mob, who claimed that the mosque was built on the birth site of Hindu deity Lord Ram. India's Supreme Court vindicated their cause last year.

A large number of Indians are taking to social media to express their views about the demolition of Babri Masjid on 6 December 1992.

The decades-old religious dispute ended in November last year after India's Supreme Court ruled in favour of building a temple on the site of the mosque to Ram Lalla Virajman, the infant Hindu deity, in a landmark 929-page judgement unanimously delivered  by a five-judge bench.

The Hindu god had been represented in the court since 2002 by Triloki Nath Pandey, a senior functionary from the Vishwa Hindu Parishad (World Hindu Council).

While many of the Twitter users commemorated the day as 'Shaurya Diwas' (bravery day), other users condemned the event and even said that it had led to the 'demolition of India'.

​On the other hand, some social media users have labelled the mosque's demolition an "injustice" as they complained that those allegedly behind the 1992 incident haven't faced any court punishment.

​After the Supreme Court verdict last year, a special court constituted by India's Central Bureau of Investigation (CBI) this year acquitted several senior leaders from the Bharatiya Janata Party (BJP), who'd previously been accused of hatching a "conspiracy" that led to the destruction of the 16th century mosque.

Among the leaders who were acquitted were former deputy prime minister Lal Krishna Advani, and federal cabinet ministers Murli Manohar Joshi and Uma Bharti among others.

Many in India's 200-million-strong Muslim community have lamented the court judgement this year, questioning how the judiciary could overlook the mass mobilisation movement that ultimately led to the 1992 incident.

In 1949, idols of the Hindu god were placed at the disputed structure, which marked the beginning of a decades-old legal dispute over the ownership of the 1,500 square metre plot of land.

The demolition of the mosque by Hindutva mobs in 1992 was preceded by years of mass mobilisation spearheaded  by leaders such as Advani and Bharti. The demolition led to the filing of cases against these leaders and the establishment of an enquiry commission.

In 2010, a state court in Uttar Pradesh adjudged that the disputed land must be divided between all three three quarrelling parties- Sunni Waqf Board (Muslims), Nirmohi Akhada and Ram Lalla (the latter two claiming to represent Hindus).

The judgement was, however, challenged in the Supreme Court, which last year finally ruled in favour of the Hindu litigant.

The federal election victory of the BJP in 2014 is said to have lent a push to the settlement of the case, with Ram Temple also featuring in the election manifesto of the ruling party in both 2014 and 2019.

The Supreme Court also ordered the authorities to allot a five acre plot near the site of the destroyed mosque so that Muslims could construct another house of worship.

The cornerstone for the construction of the temple was laid by PM Modi on 5 August this year.