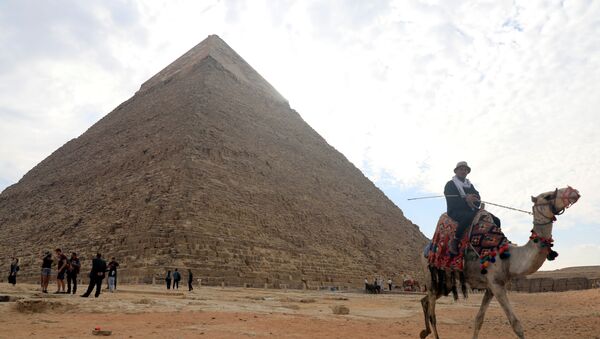 © REUTERS / AMR ABDALLAH DALSH
Subscribe
After Isaac Newton's death in 1727, he left behind no will and an extensive number of papers. The notes and manuscripts are estimated to contain 10 million words. Though many deal with science and maths, other papers reveal another side to the man who discovered gravity.

Recently uncovered notes revealing that Sir Isaac Newton sought to expose the secrets of the pyramids in Egypt while formulating his theory of gravity are expected to be sold for hundreds of thousands of pounds when bidding closes on Tuesday.

The unpublished notes which are thought to have been produced in the 1680s were only found a little more than 200 years after Newton's death, and have now been put up for sale at Sotheby's.

Newton, who is credited with laying the foundations of original 'Newtonian' physics, establishing the laws of motion, and the law of gravity, studied the pyramids during the late 17th century while at his birthplace Woolsthorpe Manor in Lincolnshire, seeking to unlock historic secrets such as Biblical coding and the precise timing of the apocalypse.

The scribblings of the legendary mathematician show him desperately attempting to decipher the unit of measurement used by ancient Egyptians to construct the pyramids.

Newton believed the dead civilisation had worked out how to measure the Earth and believed if he devised how they calculated the pyramids, he could measure the circumference of the planet.

The note's edges have signs of burn damage, which is said to have happened after his dog, Diamond, tipped a candle over after jumping up onto the table.

Newton also was looking to decode divine prophecy in the bible and wanted to decypher the dimensions of the Temple of Solomon.

Although his reputation comes from his achievements in mathematics, Newton's core interests were alchemy and theology. His obsession with the false science of turning all metals into gold, as well as his unorthodox religious beliefs, were kept secret because of the risk of losing his career.

"These are really fascinating papers because you can see Newton trying to work out the secrets of the pyramids", Sotheby's manuscript specialist, Gabriel Heaton, told the Observer.

Heaton added that the "idea of science being an alternative to religion is a modern set of thought. Newton would not have believed that his scientific work could undermine religious belief".

"He was not trying to disprove Christianity - this is a man who spent a long time trying to establish the likely time period for the biblical apocalypse. That's why he was so interested in the pyramids".

The documents on these topics were found at Sotheby's in 1936 and some were later bought by economist John Maynard Keynes, who dubbed Newton "the last of the magicians".

Newton's secret manuscripts are expected to go to a private collector but certain libraries may also look to enter into the bid, with a financial interest in scientific books and documents growing in the past decade.

CountTo5Manual
6 December 2020, 23:38 GMT
000000
He didn’t need the pyramids to figure out when the Apocalypse was to take place. It had already taken place.