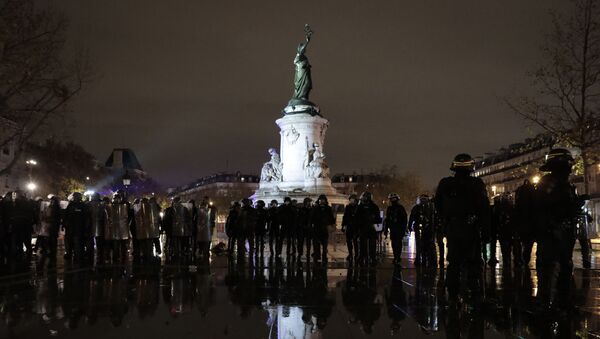 MOSCOW (Sputnik) - The Paris Police Prefecture warned participants of security bill protests against remaining at the Place de la Republique square after the rally's end, amid ongoing clashes and unrest.

A protest against a new security bill criminalizing the display of images of law enforcement officers in Paris escalated into unrest earlier in the day, prompting police to fire tear gas. As reported by a Sputnik correspondent, clashes are ongoing.

According to a tweet one hour later, 42 people were detained during the demonstration.

For the second Saturday in a row, the French have taken to the streets in Paris and other cities against a draft security law whose Article 24 entails one year in prison and a fine of 45,000 euros ($54,000) for the distribution of images and video containing identifiable personal details of police officers and gendarmes that could potentially lead to their physical and psychological harm.

As reported by the Sputnik correspondent, the Paris rally grew into unrest around 3 p.m. local time when a group of protesters in black attire began throwing rocks and fire crackers at law enforcement, to which the latter responded by firing tear gas. Following a brief period of calm, the unrest again escalated into violence, with cars set on fire, windows smashed and surveillance cameras dismantled.

One protester reportedly lost several fingers after an alleged grenade exploded in his hands.

A similar protest in Paris last Saturday grew into massive unrest and resulted in multiple arrests.

The controversial bill was passed by the French parliament's lower house on November 24, immediately sparking broad public decry, especially among journalists, although the French government repeatedly assured the nation that the new law would not prevent the press from exercising their professional activities.

Following the controversy, the lower house admitted that Article 24 should be revised. The bill is due for a hearing at the upper house in January, 2021.