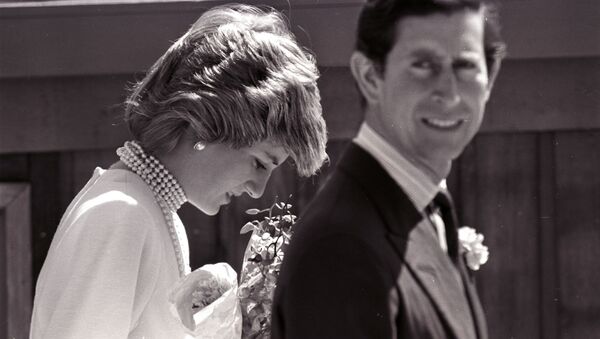 Aleksandra Serebriakova
Moscow-based Sputnik correspondent specializing in foreign affairs.
All materialsWrite to the author
In 2016, Netflix aired its highly popular drama series The Crown that was set to provide a retrograde perspective on the reign of British royal Queen Elizabeth II. The most recent season of sensational programme has been deemed the most controversial so far, after it has introduced a new character to the show – Princess Diana.

The British royal family has seen some harsh grilling on social media this week, after a Netflix Twitter account published a clip featuring the late Princess Diana’s vocal recollection of her troubled marriage and the role Camilla Parker Bowles played in it.

The video, posted by NetflixFilm, has presented some edited footage from “Diana: In Her Own Words”, a documentary that was based on tapes the Princess of Wales' secretary recorded for biographer Andrew Morton. The film was first aired in 2017 by Channel 4 despite a strong opposition from the princess’ relatives and friends.

In the short clip shared by Netflix, Princess Diana is heard reflecting on how her husband’s affair with his future wife Camilla has left her heart-broken.

​According to the platform, the documentary was providing answers to “much of what you’re asking”, potentially referring to criticism of its latest season of  “The Crown”, a drama series which has been accused of being too harsh on the royal family and not factual in its assessment of what has happened between the Prince and Princess of Wales.

The online commentators were ready to point out that Netflix’ link to the documentary proved that its vision of the situation was not groundless. The post eventually generated a wave of comments slamming the Royal Family’s “truly evil” treatment of the late princess and disregard for her feelings, while directly targeting Prince Charles and his current wife Camilla.

I watched this before I watched the crown. It’s just so unbelievable that that evil family made him choose a suitable wife and allowed him to continue with the real horrible woman. Diana was a child plain and simple. They tormented her. She ended up looking like a spoiled child.

RF's truly evil. It needed a virgin, an innocent to ensure their lineage. Once Diana fulfilled her mission, RF sacrificed her in darkness of hatred. We never believed in the accident thesis. I have seen this documentary 4 times & each time i cry, my grief is still great today.

You are standing by your facts that are thoroughly invested and investigated. The viewers can find most of the Data in our independent research. The BRF need to take several seats because the receipts are there pic.twitter.com/yCEVaWtSSb

However, to some royal insiders, it was Netflix that was guilty of being underhanded.

“It's one thing to make a drama that not even the writer claims is entirely factual, but for Netflix to use its corporate social channels to create and post material that is one-sided at best feels like corporate trolling – it's pretty sinister,” one source told the Daily Mail, commenting on the situation.

According to Michael Forsyth, the Lord Forsyth of Drumlean, the platform has been “crossing a line” with moves like that. Lord Forsyth, who is currently the chairman of the UK’s Economic Affairs Committee, pledged to bring the issue to Prime Minister Boris Johnson and the House of Lords directly.

The Crown, a Series Under Fire

Lord Forsyth has been pretty vocal about his criticisms of 'The Crown', while accusing Netflix of deliberately publicising “negative programmes about the Royal Family”.

“What they are doing is absolutely shocking. It is mendacious and it is untrue. And as every day goes by without any action on the issue, more and more people are seeing this programme, and unfortunately people believe this stuff to be fact,” the lord argued.

“They [Netflix] can't continue to say, 'This is drama, this is not our fault'. They are clearly using a programme which is sensationalist and mendacious to promote their commercial interests,” he insisted.

This week, Lord Forsyth complained to British broadcasting regulator Ofcom about Netflix’s “hurtful, false, misleading and poisonous impression of people in our public life who cannot fight back” and called upon the watchdog to start applying regulations to the American giant in the same way they do to any broadcasters streaming in the UK.

Diana, Princess of Wales and Prince Charles stand in front of Uluru, formerly known as Ayers Rock, during their tour of Australia in March 1983. pic.twitter.com/3Gq4QU55ra

The scandalous series have been embroiled with controversy since it first aired in 2016. However, season four of the popular drama has seen a renewed wave of scrutiny after covering the acquaintance, engagement and marriage of Prince Charles and Diana Frances Spencer, future Princess of Wales.

Many maintained that the story presented by the show’s writers, that showed its participants in quite a dim light, was simply mired in fantasies. A lot of the viewers however bought this interpretation of the story, while launching an online attack against Prince Charles and his current spouse, the Duchess of Cornwall.

Absolutely incredible that @netflix has put a disclaimer on #TheCrown pic.twitter.com/t47YteBiWv

​According to the Daily Mail, UK Culture Secretary Oliver Dowden has recently sent a letter to Netflix, urging the platform to start clearly presenting the series as a “work of fiction” to avoid any misinterpretation.