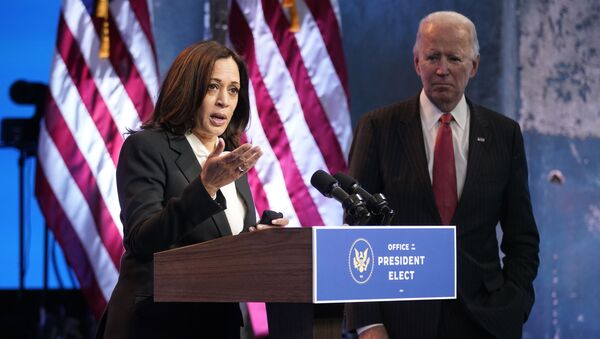 Aleksandra Serebriakova
Moscow-based Sputnik correspondent specializing in foreign affairs.
All materialsWrite to the author
Democratic challenger Joe Biden, who is projected to win the US presidential election if the Electoral College certifies election results on 14 December, previously dubbed himself “Kamala Harris’ running mate” following a flow of jokes that it was the California Senator who would be ruling the White House, were the pair to win the 3 November vote.

Former Vice-President Joe Biden left a weird impression among some CNN viewers on Thursday after telling host Jake Tapper that he would feign illness and leave the White House if he ever has a profound disagreement with Kamala Harris in relation to morality issues.

Appearing alongside his vice-presidential pick, Biden contemplated how he and Harris would try to put aside their differences to come to a joint conclusion when making policy choices.

“We are simpatico on our philosophy of government and simpatico on how we want to approach these issues that we are facing,” Biden said, while reflecting on how a similar procedure has taken place when he served as a vice-president during the Barack Obama administration.

Then he said something so peculiar, that it was very difficult for viewers to discern whether he was joking or relaying the “the silent part out loud”, as some users have mused on social media.

"Like I told Barack, if I reach something where there's a fundamental disagreement we have based on a moral principle, I'll develop some disease and say I have to resign,” the Democratic challenger stated, provoking a silent nod from Kamala Harris.

Online commentators could not hide the effect Biden’s words had left.

Joe Biden joked about developing some disease & say I have to resign, Thursday on CNN, discussing his upcoming working relationship with Kamala Harris.
Biden said, The thing we are simpatico on is our philosophy of government.
Rumored very early pre election, could be serious. pic.twitter.com/Zi4qOpm1LG

I had to watch it twice to make sure I heard it right.... WOW

Evidently a symptom of dementia is revealing the game plan.

They’ve already talked about the plan – I really don’t even think he realizes he’s saying it aloud.

Not The First Time

The apparent jest comes after many have claimed in the past that Kamala Harris would be the real power behind America’s administration if Joe Biden wins. Speaking to supporters in Atlanta in late October, the Democratic candidate himself weighted in on this rumour after introducing himself as “Kamala Harris’ running mate”.

“You all think I’m kidding, don't you,” he added back then, without elaborating further, a joke that Trump’s campaign Press Secretary Kayleigh McEnany said had simply confirmed “what we all knew”.

Kamala Harris has also raised some eyebrows in the past when referring to the “Harris administration” she said would take place after Joe Biden is elected the next American president. The senator quickly corrected herself at the time though, eventually dubbing the apparent arrangement the “Biden-Harris administration” but her words have already left some daze in the air.

The CNN interview was the first time the two have sat together for a lengthy talk after being proclaimed the winners of the US presidential election by media, something that has been strongly opposed by US President Donald Trump, who maintains that the vote had been “stolen” from him via widespread irregularities and election fraud.