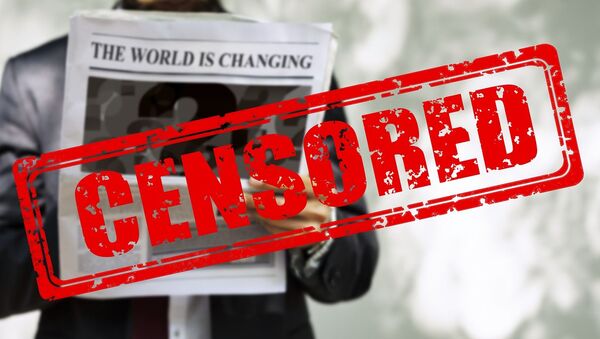 Section 230 of the 1996 Communications Decency Act (CDA) is legislation that shields tech companies from lawsuits over user content. However, many, including US President Donald Trump, suggest that the tech giants have been exercising censorship, and the legislation that protects them from legal action should be removed.

Shortly after Donald Trump announced his intention to veto the National Defense Authorisation Act (NDAA) in the event that the bill does not also include the termination of Section 230, US Congressional negotiators rolled out a final version of the NDAA, with no mention of CDA legislation.

Don Debar, a US political analyst, shares with Sputnik his opinion on Trump's demands to scrap Section 230 and the reluctance of the Congress to fulfill them, along with the meaning of Section 230 in the current complicated relations between the US government and social media.

Don Debar: It is important to recognize that a fundamental power struggle over access to information is taking place in the US and that the restriction of the dissemination of information by internet platforms such as Facebook, Twitter, YouTube and Google is a primary front of that struggle. Since the internet was first made accessible to the masses, the old limits of national and bloc media universes came crumbling down as ordinary people in the millions began to share information, unmediated, from all over the world. Even as media corporations raced towards monopoly to a degree not even Goebbels could have envisioned, their control over their audiences began to slip as access to other media centers and even ordinary people from around the planet was made available. This, of course, has unsettled - to put it mildly - those elites whose position rested upon their monopoly of the public narrative.

Legally, there are two poles in the struggle that present a contradiction for those seeking to simply control the traffic of information with respect to the role of internet providers and, particularly, social media platforms:

On the one hand, there is the "common carrier" who, in essence, operates in the same role as the telephone company did in the prior media landscape; i.e., they operate the wires and equipment and make it possible for people everywhere to have remote communications, but they do not have any role in the conversations that take place. They do not get on the phone with you and moderate the call. These companies, consequently, have no legal liability for what is said - they are not responsible for telephoned threats or obscene phone calls. They simply make sure that whatever is said on their wires is reliably audible.

On the other hand is the provider who sets standards that, in one way or another, affect the content that their service helps to distribute. These are not merely "carriers" of the words, images, etc. of another; they are also co-authors, publishers, etc. In essence, once they've decided to take a role - any role - in determining what was and was not suitable for distribution, they've become liable for distributing those things that others found objectionable, obscene or illegal.

Given the present condition, the state and powerful media companies have been trying to find a path to having it both ways - so that they can exercise editorial control in one way or another over the content they distribute, and yet they can avoid liability for the damage others may suffer as a consequence of the creation and/or publication and/or distribution of this content.

That is the heart of the current disputes, including Section 230. And the dispute has placed President Trump on one side, favoring an approach that would, in the words of the Trump Justice Department "ensure that platforms are fairer to the public when removing lawful speech from their services," while it appears from the various public statements made that Democrats and some others would prefer more and deeper control of the public discussion. That this dispute has not yet been resolved is no surprise when one considers it is taking place in the context of a larger struggle between these groups that is far from resolution.

Sputnik: Who can lobby for this law, in your opinion, given that Trump's posts on social media are regularly labeled as “untrustworthy”, including the latest Facebook video?

Don Debar: It isn't just the President's posts that are the subject of this new, literally totalitarian censorship; even his ordinary and extraordinary communications with the American people are being "moderated" - censored - by an almost universal share of the corporate media. One case in point is the address that he made to the people on Wed., December 2, wherein he began by saying "I am determined to protect our election system, which is now under coordinated assault and siege." The very fact of an incumbent US president - in the aftermath of an election which the media has declared to have been won by his opponent - making a public pronouncement like that as he rejects the reported outcome as fraudulent is, to put it mildly, newsworthy. Yet, not only did this not get massive coverage; rather, it got practically no coverage at all, certainly nowhere near the coverage that Biden's dog got the day before for breaking the former VP's foot.

Under these conditions, those who are affected must be the ones lobbying for the law. This apparently includes the president.

Sputnik: The US president earlier vowed to veto the NDAA if the bill did not suspend Section 230 - legislation within the Communications Decency Act that shields social media platforms from liability over user content. Do you think Trump will make use of his veto power or is it too late?

Don Debar: This is too difficult to say, given the complex situation that currently exists between the White House and Capitol Hill and the media.

Sputnik: The main body of Section 230 is only 26 words long and reads: "Neither the provider nor the user of the interactive computer service is considered to be the publisher or bearer of any information provided by another content provider”. In other words, tech companies are not responsible for user postings, however, companies have the right to moderate the content of their websites as they see fit. To what extent, in your opinion, does the application of this law correspond to its original meaning?

Don Debar: It is an attempt to "have it both ways," as they say. Historically, either you moderated content (e.g., news programming), or you didn't (e.g., phone company). If you did moderate, you were liable for what you published. If you didn't moderate, you had no liability, because you had no role in producing or selecting the content. The recent and proposed changes would allow these companies, essentially, unlimited power to say anything they'd like, regardless of the consequences to others. Coupled with monopoly control of global information distribution, that is an incredible amount of power under discussion.

Don Debar: I think it would be more accurate, and thus more useful in terms of understanding who is on which side and why, to call it by its true name: censorship. To the extent that one recognizes censorship as an interventionist policy, then the answer is "yes."