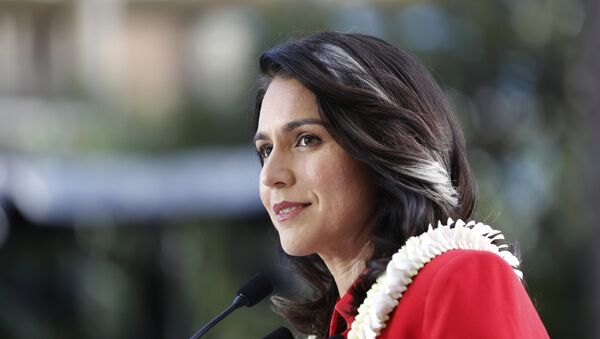 Max Gorbachev
All materialsWrite to the author
Trump has long threatened to take action against big tech, accusing the business sector of bias against conservatives and censorship of right-wing voices. Gabbard’s support for the outgoing president in this particular issue saw mixed reactions on social media.

​On 2 December, Trump said that he would veto the National Defence Authorization Act (NDAA), the annual defence budget bill, unless Congress repeals the liability shield for Big Tech. The president said the United States could never be safe and secure if Section 230 remains in effect.

.....Therefore, if the very dangerous & unfair Section 230 is not completely terminated as part of the National Defense Authorization Act (NDAA), I will be forced to unequivocally VETO the Bill when sent to the very beautiful Resolute desk. Take back America NOW. Thank you!

​What is Section 230 and Why Does Trump Want it Gone?

The legislation is part of the 1996 Communications Decency Act by the Congress, granting immunity to content providers over the content posted by users.

"No provider or user of an interactive computer service shall be treated as the publisher or speaker of any information provided by another information content provider", reads the key section.

If a TV channel or a newspaper makes a false report on an individual that person can sue them, but they can’t sue them if false information about them appears on Facebook or Twitter, because the social media platforms are not treated as publishers.

The president has repeatedly accused big tech of silencing conservative voices. In October, Trump and his supporters blamed social media for limiting the spread of a New York Post story on Joe Biden. The newspaper wrote that the Democrat was involved in his son’s overseas deals, which if it were true, would have constituted a conflict of interest.

Trump's advisers argued that by moderating content on their websites, social media companies act like publishers and hence cannot enjoy the protection of Section 230.

Tusli Gabbard’s support for Trump’s idea to repeal the legislation prompted a mixed reaction on social media. While some users praised the official for breaking the party’s ranks and supporting the Republican…

This is a huge bipartisan issue. Glad you're in on this, Tulsi!

Tulsi Gabbard showing and proving she is a true American fighting for the people and this country, not a political party. Amazing class and character!

​…Others contended that the move would destroy freedom of speech, and accused her of being a Republican proxy.

I hate big tech and their biases on many things, but can you explain why this is a good thing, @TulsiGabbard ? If you make places like this liable for other people’s opinions and comments, how will that not destroy free speech? How can we challenge power if they can sue for it?

😂😂😂 Outside her party? She’s basically a Republican which is why she didn’t make it far in the Democratic primary!