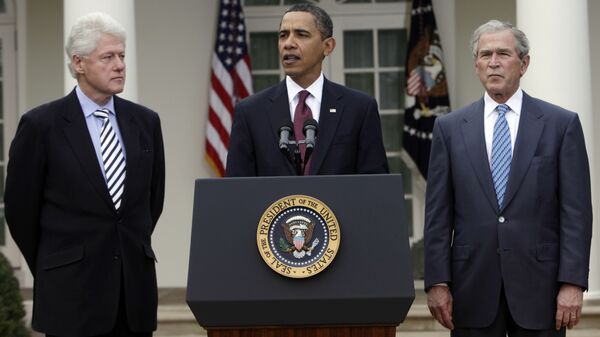 MOSCOW (Sputnik) - Former US presidents Barack Obama, George W. Bush and Bill Clinton have expressed a readiness to be inoculated with the coronavirus vaccine live to build Americans’ trust in the shots.

In an interview with SiriusXM radio on Wednesday, Obama said that he had full trust in top US infectious disease expert Anthony Fauci, noting that if the latter "tells me that this vaccine is safe … absolutely I’m going to take it."

"I will be taking it and I may take it on TV or have it filmed so people know that I trust this science", he said.

The ex-president recognised that there are people, including among the African American community, who are skeptical about vaccines. He, however, stressed that these were mass vaccinations that virtually eliminated diseases like poliomyelitis and stopped mass deaths from measles and smallpox.

The same day, Bush's chief of staff told CNN that the former president had spoken with Fauci and the White House’s COVID-19 response team "to see what he could do to help promote the vaccine."

"First, the vaccines need to be deemed safe and administered to the priority populations. Then, President Bush will get in line for his, and will gladly do so on camera", Freddy Ford added.

Clinton, too, is ready to take the vaccine in public.

"President Clinton will definitely take a vaccine as soon as available to him, based on priorities determined by public health officials, and he will do it in a public setting if it will help urge all Americans to do the same", his spokesman Angel Urena told CNN.

The statements come as the United States expects the first shipments of coronavirus vaccines of pharmaceuticals Pfizer and Moderna in mid-December, once they receive emergency use approval.

According to a November Gallup poll, Americans’ fear of coronavirus vaccinations began to ease. Forty-two percent of US adults, however, still said that they would not take the shot.