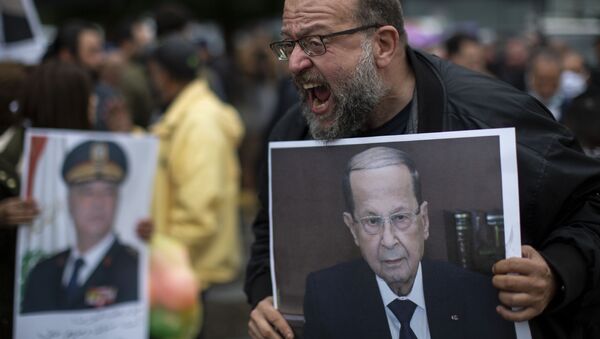 © AP Photo / Hassan Ammar
Subscribe
BEIRUT (Sputnik) - International assistance in any form is extremely important for Lebanon, in the process of recovering from an economic crisis and the restoration of Beirut after a port blast, Lebanese President Michel Aoun said, at the second online conference to support the country, organized at France's initiative.

"Your help amid worsening crises is important for all Lebanese wherever they are. Your help is a necessity, no matter which way it will be transferred and what mechanisms will be used, since it will be under your supervision and under the supervision of the UN," Aoun said.

"It is important to recall that Lebanon is currently in talks with the World Bank on a $246 million loan for the Lebanon Emergency Crisis and COVID-19 Response Social Safety Net Project. Negotiations are due to end this week. We hope to receive urgent approval from the head of the board of directors of the World Bank," he said.

The Lebanese leader said international assistance was needed especially against the backdrop of a large number of refugees from Syria.

Lebanon has been experiencing deep economic and political crises for years, resulting in the government's resignation amid mass protests in 2019. A new government led by Mustapha Adib resigned soon after the August explosion, which caused over 200 deaths and injured thousands in the country's capital of Beirut, deepening the Lebanese economic crisis.

Following an international donor conference hosted by French President Emmanuel Macron, the International Monetary Fund (IMF) said in a press release that Lebanon must form a government to begin rebuilding an economy made worse after being devastated by a massive explosion four months ago.

"We endorse the broad principles for reforms needed to restore macroeconomic and financial stability outlined in the Reform, Recovery and Reconstruction Framework (3RF) presented today," the Wednesday release said. "Regrettably, despite our multiple engagements at technical level […] in the absence of an empowered government, we have not gone very far."

Lebanon has been without a government since the August 10 resignation of Prime Minister Hassan Diab, who continues to serve in a caretaker capacity. Diab stepped down less than a week after a massive explosion destroyed much of the port of Beirut.

Even before the August 4 Beirut explosion, decades of rampant corruption resulted in the disappearance of billions of dollars, according to speakers at the conference.

Macron told participants that Lebanon can expect no international aid until the nation establishes a government that is willing to implement reforms.