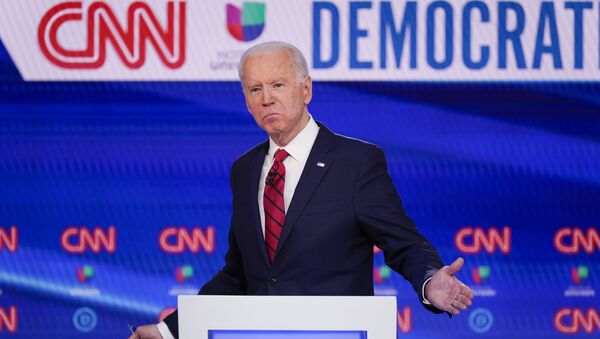 Evgenia Filimianova
All materialsWrite to the author
Recordings released by an undercover news outlet have revealed what appears to be CNN boss Jeff Zucker telling his staff to downplay a bombshell story implicating Joe Biden in foreign meddling schemes.

Project Veritas has posted the second batch of telephone conference calls of CNN's morning editorial meetings, where a person alleged to be Zucker is heard to say that the controversy around Joe Biden's son, Hunter Biden, and his dealings in Ukraine when his father was the vice president of the United States – was to be avoided ahead of the US election.

The person purported to be Zucker is heard adding he doesn't think "we should be repeating unsubstantiated smears just because the right-wing media suggests that we should".

The story on Joe Biden's alleged dealings in Ukraine was published by the New York Post on 15 October, revealing emails supposedly from Hunter Biden's computer and purportedly shedding light on his business connections with a Ukrainian gas company and officials.

The article contained emails that Vadym Pozharskyi, a top official at the Ukrainian energy company Burisma, allegedly sent to Hunter. One of the emails thanked Biden for organising a meeting with his father, while the second message showed Pozharskyi asking Hunter how he could use Joe Biden's influence to support Burisma.

In the recording released by Project Veritas, a voice that is alleged to belong to CNN political director David Chalian is heard saying that the broadcaster would not go for the story.

"Obviously, we're not going with the New York Post story right now on Hunter Biden… Obviously, Hunter Biden's lawyer is quoted in the New York Post piece and we'll just continue to report out this is the very stuff that the president was impeached over, this is the stuff that Senate Committees looked at and found nothing wrong in Joe Biden's interactions with Ukrainians and now having an email that perhaps there was a meeting with someone from Burisma it seems", Chalian said.

CNN Executive Vice President and General Counsel David Vigilante, who purportedly took part in the call, agreed that "we should be awfully careful regarding coverage of the Hunter Biden story" and also asked why some political journalists had shared the story on their social media accounts.

"What in the world are Maggie Haberman and [Politico reporter] Jake Sherman doing retweeting that story?", Vigilante asked.

This recording released by Project Veritas is not the only account of CNN appearing to have blocked or downplayed a news story.

The purported CNN boss can also be heard on another leaked recording telling his colleagues that a story implicating Joe Biden in cutting deals and making millions from China is not credible.

"On the Breitbart, New York Post, Fox News rabbit hole of Hunter Biden, which I don't think anybody outside of that world understood last night, The Wall Street Journal reported that their review of all corporate records showed no role for Joe Biden on the Chinese deal. And yes, I do put more credibility in The Wall Street Journal than I do in the New York Post", Zucker said.

The story he was referring to was posted by the New York Post and reported the comments made by Hunter Biden's ex-business partner Tony Bobulinski.

Bobulinksi claimed that Joe Biden had been engaged in family scheme deals with China, while his son Hunter was to receive a 10 percent cut from one of the Chinese deals.

A CNN executive, who is also the senior vice president and managing director of CNN en Español, Cynthia Hudson has reportedly voiced the reason why the Cuban population would vote for Donald Trump. In yet another recording released by Project Veritas, Hudson could be heard saying that Cubans are "attracted to bullies".

"Trump has used the communism, socialism rhetoric as part of his hook for the Cubans in Miami, how that has resonated and how the Biden team has not done enough to counter that", Hudson says. "The only reason they are supporting Trump is because of that narrative. And that narrative and the fact that sadly, I have to say, there's a population that's very attracted to bullies", she said in September, according to the audio.

​Hudson also added that "no one is countering" Trump's effective messaging in Florida.

"The Cubans are going to vote for Trump. And that's terrifying, and so, I think there is a way to counter the narrative in Florida that is not being taken advantage of", she added.

On another recording, the person alleged to be CNN boss Zucker is heard calling Donald Trump "a national security threat". According to the call released by Project Veritas, Zucker criticised Trump for questioning mail-in voting, when he said:

How You Make the Sausage

James O'Keefe of Project Veritas called CNN's Jeff Zucker to inform him that the newsmaker's editorial meetings had been recorded. Commenting on CNN's choice of coverage angles and stories, O'Keefe told Zucker:

“We think for the American people to know how you make the sausage. How you to quote Noam Chomsky, manufacture consent. Consent should not be manufactured, it should be informed. We should be an informed populous".

The released recordings are part of a number of investigations conducted by Project Veritas into CNN, according to CEO James O’Keefe. He said the evidence demonstrated CNN’s “partisan political agenda and total disconnect with journalistic ethics.”

​According to its own account, CNN International is the most widely distributed news channel, reaching over 402 million households.