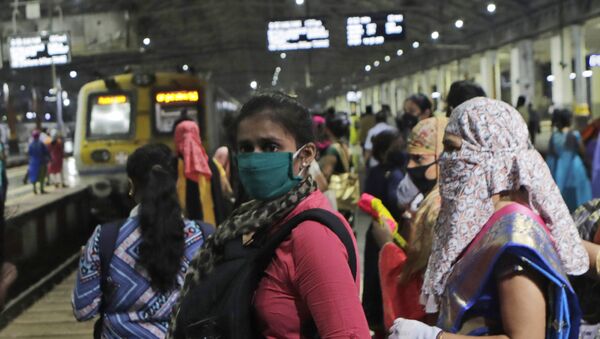 Radhika Parashar
All materialsWrite to the author
Spanning a distance of nearly 430 kilometres, the local train network in India's tinsel town Mumbai is often called its lifeline. Every day, millions of Mumbaikars ride these crowded trains to commute from one part of the city to another at a low cost. Changes to train schedules often entail serious headaches for commuters.

Three of Mumbai's local train stations – Palghar, Kelwe Road and Saphale – have witnessed a "rail roko" protest, mainly by essential service employees, following an announcement that the schedule of an early morning train from another station, Dhanua, would be changing this week.

Mumbai Wants Its Lifeline Back: Commuters Protest, Demanding the Return of Local Train Services
The Hindi term "rail roko" translates to "stop the train" – and true to the name of the protest, commuters at the Palghar, Kelwe Road, and Saphale stations gathered on the railway tracks Wednesday morning, protesting against the change in train schedules.

Occupying the rail route, the outraged commuters said that they will not be able to reach their jobs on time if the schedule of the train coming from Dhanua station changes.

Inclining towards public sentiment, officials from the Western Railway decided to restore the special suburban services to their original time.

Pictures of several protesters taking over train tracks in the midst of the pandemic have since surfaced on social media – giving a glimpse into the chaos that unfolded in Mumbai today.

Protest! Changes of train timings leads to early morning rail roko at Palghar station near Mumbai on @WesternRly Cancellation of 4:40am train hits those on morning, want restoration of train! @mid_day pic.twitter.com/u3CsRHnG8x

​In July, similar protests were observed at local train stations in Mumbai, when essential service employees demanded the city administration and Maharashtra state government to re-start the services amid the lockdown. Such protests gather a large number of people, which significantly increases the risk of spreading the coronavirus.