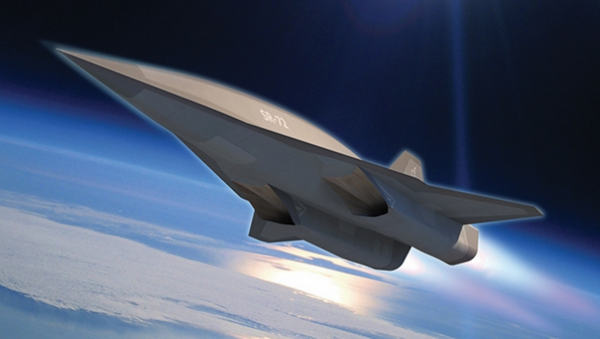 Morgan Artyukhina
All materialsWrite to the author
Using a novel design likely suggested by an American scientist whose work has been largely forgotten, a group of Chinese researchers say they have created an aircraft engine that can propel an airframe as fast as 11,800 miles per hour, or Mach 16.

According to the South China Morning Post, the revolutionary new engine is a standing oblique detonation ramjet (Sodramjet) design, with no moving parts, using the plane’s super-fast speed to push air into the chamber, where it is injected with hydrogen fuel and detonated, flying out the back of the engine as thrust.

That’s how all ramjets and scramjets work, which have been used to power missiles since the 1960s. However, the sodramjet design tested in the recent experiments improved on the concept “by replacing diffusive combustion with an oblique detonation that is a unique pressure-gain phenomenon in nature,” according to the abstract of a paper published by a group of Chinese scientists in the Chinese Journal of Aeronautics on Saturday.

Concept demonstration model of Sodramjet engine and its installation in JF-12 shock tunnel. Figure included in November 28 paper published in the Chinese Journal of Aeronautics.
© Institute of Mechanics, Chinese Academy of Sciences

The study authors found that the engine could operate at speeds of up to Mach 16, propelling an airframe around the globe in just two hours.

According to the SCMP, the Chinese scientists were likely inspired by the speculative work of Richard Morrison, an American engineer for the US National Aeronautics and Space Agency (NASA), who suggested the engine design in a 1980 paper that aimed to address problems created by a conventional scramjet design.

The paper noted that “the US government shifted the bulk of hypersonic research from Nasa to private companies such as Boeing and Lockheed Martin, and Morrison’s idea was largely if not completely forgotten by the American defense industry. The contractors put all their resources into scramjet design and continued to suffer setbacks that eventually caused them to trail other countries.”

China has claimed to already have hypersonic weapons and several other countries are said to be testing the technology, but a hypersonic vehicle that could carry humans remains an elusive piece of science fiction.

In April 2019, researchers at China’s Xiamen University tested a hypersonic aircraft named Jiageng-1 in the Gobi Desert, and in August 2018, tested a Starry-Sky “waverider” hypersonic vehicle. In the US, the US Air Force and the Presidential and Executive Airlift Directorate handed out a contract in August 2020 to develop a hypersonic airliner to serve as a future Air Force One for the US president.