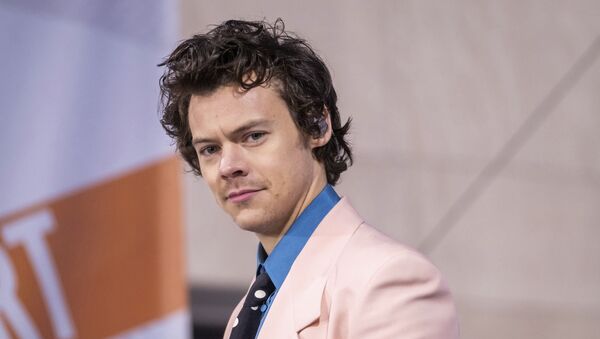 Daria Bedenko
All materialsWrite to the author
British hitmaker, actor and model Harry Styles made history earlier in November as the first Gucci-adorned male on a Vogue magazine cover. His move, however, caused waves on social media - particularly from conservatives who denounce him for what they consider to be a feminine look.

In what appears to be a taunt towards conservative US GOP commentator Candace Owens, Harry Styles took to Instagram on Wednesday to share a picture of himself wearing a blue suit with a ruffle shirt while eating a banana, spicing it up with a play on an earlier comment made by Owens: "Bring back manly men".

The caption refers to Owens' opinion on Styles' appearance on the Vogue cover, delivering some gender-agnostic looks, when she tweeted: "There is no society that can survive without strong men. The East knows this. In the west, the steady feminization of our men at the same time that Marxism is being taught to our children is not a coincidence. It is an outright attack. Bring back manly men.”

Speaking to Variety, the British singer addressed the conservative commentator on her remarks, noting that the borders between male and female clothing have become blurred.

“To not wear [something] because it’s females’ clothing, you shut out a whole world of great clothes", Styles told Variety on Wednesday. "And I think what’s exciting about right now is you can wear what you like. It doesn’t have to be X or Y. Those lines are becoming more and more blurred.”

In November, Styles told Vogue that he admires women's clothing and takes inspiration in other music stars who also seemed to feel the same about androgynous looks, such as David Bowie, Elton John, Freddie Mercury and others.

“There’s so much joy to be had in playing with clothes. I’ve never thought too much about what it means—it just becomes this extended part of creating something", he said.

His fresh post drew elation from followers who appeared to enjoy the "passive aggressiveness" of the caption and joked that "Candace Owens was found crying in Harry's porch".

"When people try to tell me I don’t have influence, and then @Harry_Styles dedicates an entire post to my tweet. I inspire global conversation. #BringBackManlyMen Shots fired", she tweeted, finalizing the post with several laughing emojis.

When people try to tell me I don’t have influence, and then @Harry_Styles dedicates an entire post to my tweet.

​After engaging in a tweet discussion with others for her comment, Owens followed-up: "Men in ball gowns & little girl’s clothing are lauded as icons. Hollywood is no longer about diversity, it’s about perversity. I speak for people who do not worship perversity".